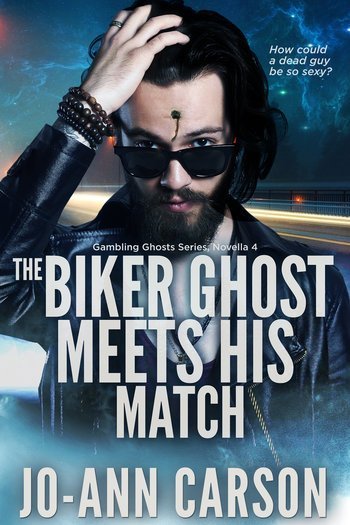 The Biker Ghost Meets His Match

How could a dead guy be so sexy?

When Charlene Walker, a tattoo artist with a sweet tooth for bad boys, starts a boycott of the haunted teahouse in a small, west coast town, no one alive or dead is safe. One way or another, she intends to stop the haunting of her brother.

Biker ghost, Rufus has no idea what he’s up against. Her saucy personality makes him feel alive, not to mention her provocative tattoos and every inch of her body hidden beneath. Pulled into her web, he finds himself confessing to more than the ace up his sleeve that got him killed, and he struggles with feelings he never imagined having.

Adding to their epic heat is the mischievous charm of a resident pirate ghost and the twisted intentions of a human trafficker from Charlie’s past.

What happens when you mix an ink slinger with attitude, a cheating gambler, a playful pirate and an evil creep? Another Gambling Ghost story.

“The beautiful thing about poker is that everybody thinks they can play.” ~ Chris Moneymaker

With a stack of posters in one hand and a roll of duct tape in the other, Charlie Walker stood in front of the haunted teahouse admiring her work. At two-foot intervals, all along the graying, cedar fence, she had put up posters. “Ghosts are Evil!” As she couldn’t box the ears of the spirit who haunted her brother, this, she figured, was the next best thing.

If the teahouse lost customers, Azalea, the woman who owned it, would suffer and she would take her brother Rufus, the guilty ghost in question, to task. This was Charlie’s plan: a domino effect to knock out the bad guy. She shook her head at the thought. A week ago, she didn’t believe the dead could roam the earth, but when she saw how traumatized her big, bruiser of a brother, Mad Dog, had become, she took action. She would battle with the dead, or undead, or whatever this Rufus character turned out to be to give her bro peace. The feud had to be stopped.

She took a deep breath of the salty, west-coast air and blew it out slowly. The artist in her felt proud of the powerful design on her posters. Her ghosts looked truly gruesome and menacing. No one would set foot in a house that harbored them. But a voice in her head wouldn’t shut up. In what universe did she think she could take on any biker, let alone a dead one?

It was easy to feel confident standing in the midday sun outside the house famous for all things supernatural, knowing Rufus and his odd collection of friends wouldn’t be around until the night settled in. But this score had to be settled, one way or another, and if she were the only one in the family with the moxie to do it, so be it. She had never backed down to anyone in her life and no slimy-haired, pea-brained biker boy would change that. Even if he was beyond the veil.

Besides, she didn’t believe in ghosts. She believed that people believe in ghosts, and their fear creates trouble with a capital T. Mad Dog could lose his mind if he continued to hold on to the idea that the man he killed haunted him and would continue haunting him for all eternity. Those were the words Mad Dog had used over his cornflakes, an hour before. Sheesh, talk about gullible.

The haunting sounded stupid. Her new sister-in-law, Darlene, had called her the week before complaining that a dead, vicious biker with a hole in the middle of his forehead was haunting their house. She said the guy, dressed in leathers, came by every night, threw the pots in her kitchen onto the floor and made horrible groaning sounds as if he ate chili that had been left out in the sun for three days. She actually said that! It was killing their honeymoon mood, big time, and she was ready to leave Mad Dog if he didn’t do something about it. Since he refused to talk about the ghost or their beyond-the-grave feud, she called Charlie for help.

Charlie had mentioned at their wedding, after a bottle or two of wine, she would always be there for her. Her big mouth had got her into this.

The timing of Darlene’s call couldn’t have been more perfect. Having just broken up with her boyfriend who turned out to be the sleaziest scum of the earth, bar none, a road trip appealed to Charlie. He was into some serious shit and it was time to for her to get out of Dodge.

Charlie liked helping people out when she could. How hard could fixing a ghostly feud be? All she had to do was get to the bottom of the silly haunting story and make everyone feel safe.

A cold breeze ruffled through her hair and she shuddered. Nope, she wouldn’t let her imagination play games with her mind, even though Darlene’s fear had been so palpable on the phone it had turned her own guts upside down.

Ghosts don’t exist. Not now. Not ever. She put her poster stuff down on the ground, pulled out her cell phone and snapped a couple of pictures of the house. With a coat of paint and a few nails, it could look quite nice, but the old-and-haunted look probably helped the tea-leaf reading business Azalea ran inside.

An elderly woman dressed in a powder-blue jogging suit walked up to her with a slow, arthritic gait. “Do you know what you’re doing, dear?”

“Uh, taking pictures.” Ignoring the woman, Charlie took a selfie. But the woman didn’t leave, so she turned towards her hoping a “skedaddle” look would do the trick. The woman held her ground. The scent of lavender grew around them.

Brown age spots marked the woman’s round face, framed by wispy, white hair. Her blue eyes, the color of robin eggs, looked both fragile and determined. She pointed her crooked forefinger at the front door of the teahouse and shook her head. “Mark my words: there be ghosts in there. Real ghosts.”

“Right.” Charlie stopped herself from laughing. “Thanks for the warning.”

“You don’t want to be riling up the ghosts in Sunset Cove.”

Before Charlie could answer, the woman walked away muttering. “Young people never listen.”

The longer Charlie stayed in the small town the weirder she found it. She had arrived at eight that morning. After Darlene filled her in on the supposed “hauntings” over coffee and some wickedly good muffins, Charlie had hatched her plan.

If she had the story right, the ghost responsible was called Rufus, the deceased brother of Azalea, who owned the teahouse, and the former leader of the local motorcycle gang. According to local legend, Rufus and his friends gathered every night to play poker in the house. Poker! Right, like a bunch of dead guys were hanging out to raise their bets and collect piles of plastic poker chips. It never ceased to amaze her how gullible people could be. The town had created its own Loch Ness monster and no doubt made a profit from it during tourist season.

Still, she reasoned, stories were often founded on some kernel of truth. Someone was feeding the town’s people the paranormal tales, and she suspected it was Azalea. One could only make so much money from tea bags. By creating a mysterious aura around her run-down house, she improved her chances of snaring customers. Her business was not just selling tea; she sold a golden version of the future through tea-leaf readings. Having a haunted house as a backdrop was good for business. People flocked from miles around to visit her Victorian shack and put out good money for her to tell them nice things lay ahead for them.

Since Azalea profited from the stories about ghosts that infected the minds of the locals worse than cholera in their water system, Charlie decided to stop her. The boycott posters would make people hesitate, and think about the ghosts and hopefully start to question the lingering legend of the house. Since this would not be good for Azalea’s business, she would want to stop the nonsense with Mad Dog.

It had taken Charlie twenty minutes to put up the posters she ran off the computer, and, so far, no one had tried to stop her. Not a ghost, a cop or a medium.

There was the old lady in blue, but she seemed harmless enough.

Another cold breeze ruffled Charlie’s hair and a tingling feeling crawled along her scalp. An icy wind off the ocean, that’s all it is, she thought.

The front door of the house opened and an older woman emerged. Thin and elegant, she had the fluid, athletic walk of a dancer as she approached Charlie. The woman’s white hair was piled on top of her head and held there by two black chopsticks inscribed with golden Chinese characters. Her gray eyes focused on Charlie, not with anger, or hate, or disapproval, but with incredulity.

When the woman reached Charlie, she stared over a pair of tortoise-shell reading glasses. Glancing over her shoulder at a poster on the fence, she winced. “What exactly are you boycotting?”

The woman’s strong and confident manner startled Charlie. She had been expecting the medium to be more of a soft, hippy-dippy type. “Rufus is causing trouble and I want him to stop.”

In all the scenarios Charlie had considered possible, none of them went this way. Time to start over. “My name is Charlene Bennett and Mad Dog is my brother.”

“How do you do. I have to say the art design on your poster is quite remarkable.” She glanced again at the fence. “My name is Azalea and this is my house.”

Charlie could say thank you for the compliment, but she didn’t give a fig what the woman thought of her art. She could also say it was nice to meet her, but that would be a lie and Charlie didn’t lie. She smirked. “Rufus is haunting my brother’s place.”

Charlie’s gut squeezed. Something wasn’t right here. “What exactly do you see?” she said.

The woman’s lips pressed together. “First of all, you must take down the signs. While the dragon design behind the ghouls is alluring, the message is not.”

“They’ll stop people from coming to your business.”

“Oh, I doubt that.” She didn’t look the least concerned. If Charlie had to render what she looked like into a phrase, it would be: haughty and slightly amused.

“I’ll take them down when this supposed haunting business stops.”

“Supposed?” A wide smile slid across Azalea’s face and lit up her eyes. “You haven’t met Rufus.”

Azalea waved her hand to stop her from saying more. “I don’t need to be in the middle of this feud. Come back at eleven-thirty tonight and talk to Rufus directly.”