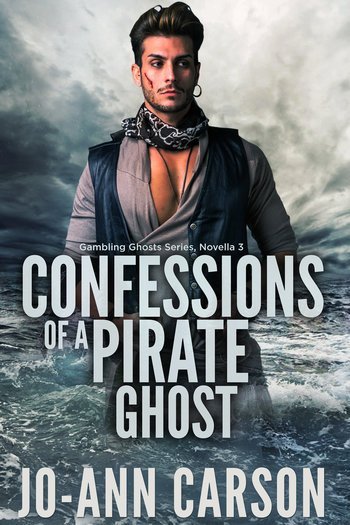 Confessions of a Pirate Ghost

Escaping the clutches of a mobster, art forger Harley Davis dives off a yacht in the middle of the night and swims ashore to Sunset Cove, a small town in the Pacific Northwest, where the only light she sees comes from inside a haunted teahouse. Soaking wet and shaking, she pauses at the door. No one in their right mind would enter such a creepy place, but she has no choice. She needs to hide.

Pirate ghost, Three-Sheets, enjoys his extended life on earth, gambling and flirting with the ladies, but when he meets Harley, he discovers he wants more out of death than a good gambling hand.

As the charming Three Sheets woos Harley, her former boss puts a contract on her head. What do you get when you mix a saucy thief, a pirate ghost and an angry godfather? Another fun, Gambling Ghost story.

“Who says life is fair? Where is that written?”

Well past midnight, Harley Davis crept up the long, creaky staircase to the front entrance of the Victorian teahouse, leaving a puddle on each step. Swimming to shore in the frigid, ocean water had chilled her to the bone, but she had no time for self-pity. Everything should be easy now that I’m on land, she told herself. A light inside the house shone brightly through the front window, a warm glow that promised sanctuary. It had been the only light visible in the small sea-side town. Slowly, she curled her stiff fingers into a fist and knocked on the old wooden door.  Silence. Shivering in the brisk night air, she tapped again. Nothing. She called out, “H-hello. Anyone? I need help.” Her teeth chattered. With a blue hand, she reached for the door handle. It felt ice-cold, and as she turned it, a chill spiraled up her arm sending a dark sense of foreboding flowing through her senses and settling into her heart. But she had no choice. She pushed on the door and entered.

“H-hello.” She said it louder this time.

The sound of faint laughter and people talking came from further inside. They must not have heard her. But the sense that all was not right sat heavily on her shoulders.

“H-hello. M-my name is …” There was no point saying her name if no one was listening, and enunciating words was so darn hard. Her eyes felt heavy. If only she could lie down. Nausea rose in her throat.

She took a step inside and the door slammed shut behind her. She was surrounded by darkness, and a tingling sensation crawled along her scalp. And I thought I was too cold to feel anything. The silence in the entranceway had a graveyard quality that she didn’t trust. Desperate to stop her creepy thoughts, she reached for the wall and fumbled for a light switch. Finding one, she flicked it on.

The noise of people continued a distance away.

In a glance, she took in her surroundings. Beyond the entrance alcove, there was a sitting room with faded rose wallpaper and a collection of well-worn wing chairs, small tables, and a sofa. An antique, Tiffany lamp stood in one corner and a chandelier hung from the middle of the ceiling. The air smelled of cinnamon and coffee, and beneath that lay a note of mustiness, as if the house breathed its age.

“H-hello,” she called out again.

It was warmer inside the house, but her body continued to shudder. Hypothermia had set in. She needed to get warm. A blanket would help. She would give all her worldly goods for a blanket and a wood fire.

A loud chorus of laughter broke out and she turned towards it. Light leaked from beneath the door of the room where the sound originated. They must be really busy not to hear her. Surely someone would help her if they knew she was in such bad shape.

Her heart raced and her breathing with it, yet her darned feet moved slower than the last drops of molasses in a bottle, so painfully slow she wanted to scream, but she knew she shouldn’t waste her energy for that. Step by step she willed herself forward, hoping she wouldn’t fall before she reached someone. “H-hello,” she continued to call in a slurred and raspy voice. “H-hello.” The light called to her.

When she reached the door, she didn’t bother knocking. Desperate, she grabbed the door handle. Its ice-cold surface sent swirling vibrations up her arm, vibrations that carried with them dark, haunting images. But she would not be stopped, by tricks of her mind. She opened the door so wide it banged against the wall.

Silence. The room was empty. A single candle burned in an elaborate candelabrum.

She wanted to scream at the horror of the moment. This room had been her last chance. The laughter must have been a recording or maybe a radio. This would be her end. “N-no,” she screamed, hearing the hysteria in her voice. This can’t be the way I die.

Out of the dark emptiness came a man’s voice. “Woman, you’re dripping.”

Harley turned towards the sound, but no one was there.