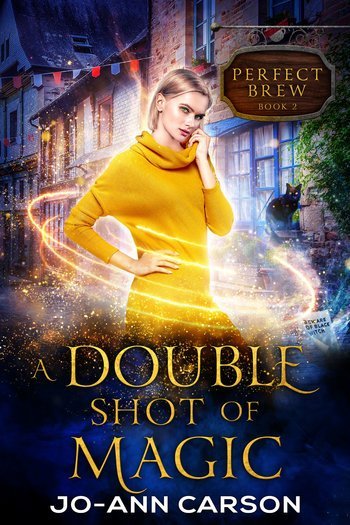 A Double Shot of Magic

~ a recipe for love

When evil rises, one witch must save the world. Cassie Black is a sorceress struggling with her growing powers and love life. As the guardian of a portal, she must stop a dark force spreading its influence in her small Pacific Northwest town before it takes over the earth.

Cassie’s friend Larry is shot twice in an alley. Clenched in his hand is a note, which reads, “BEWARE BLACK WITCH.” The note could mean many things, and none of them are good. As Cassie unravels the mystery of his death, someone tries to murder her.

Being a beautiful enchantress, Cassie attracts interesting men, who complicate her life. The very human detective, Gavin McGregor, suspects Cassie is the cause of all the unusual happenings in his own and watches her every move. Her former boyfriend, Alessandro, the vampire, wants her back in his life, alive or dead. Sanjay Kahn, a wickedly handsome, rogue warlock, vies for her attention and her heart.

A murder to solve, a force of darkness to wrestle with, and a full dance card … what more could a good witch want?