3 Reasons To Not Kiss a Warlock - Jo-Ann Carson 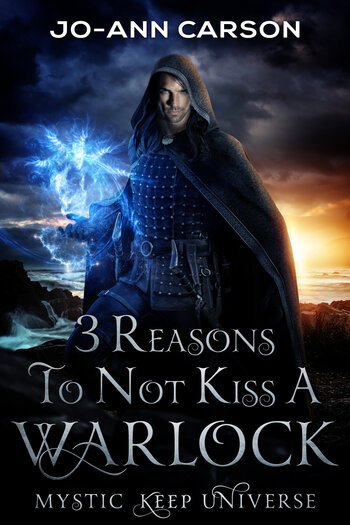 3 Reasons To Not Kiss a Warlock

Powerful magic drew me to a cozy, Pacific Northwest town called Mystic Keep, a sanctuary for witches and warlocks. It’s the sort of place where things go bump in the night—every night—and anything can happen. But that’s not what scared me.
My name is Merlina Black. I’m a middle-aged witch who has been around the block on a broom. That is to say, my dreams of finding true love died long ago. When I met the deliciously-handsome warlock, Donovan O’Reilly, my heart sputtered. That’s what scared me.
I looked for solid reasons he couldn’t be the one. After all, I was old enough to know there’s no such thing as a soulmate, old enough to know love ends in tragedy, and definitely old enough to know sexy warlocks spell trouble. But, something about this mage short-circuited my circuits, stirred my cauldron, and hexed my hormones.
Since bad luck and good magic happen in threes, I figured the cure for my lusty infatuation was to find three reasons to not kiss him. Smooching any warlock is dangerous; lip-locking with this one would be terminal.
Donovan O’Reilly, the town’s supernatural sheriff, enjoyed his life as a single dad before he met me, but everything in both our lives was about to change. Danger lurked at the edge of town. When he asked me to join him to conjure a wee bit of magic, sparks flew.
Will our shared magic be strong enough to save the town? And will I find a reason not to kiss him?
This is a steamy, stand-alone, supernatural-romance set in the Mystic Keep Universe. If you like paranormal woman’s fiction, witchy romance with a side of humor, and/or a slice of saucy urban fantasy, you’ll love this story.

Chapter 1
“It is the very error of the moon; she comes nearer earth than she was wont, and makes men mad.”
~ Shakespeare

Chapter 2
“Do not swear by the moon, for she changes constantly. Then your love would also change”.
~ Shakespeare

Chapter 3
“I ignored your aura, but it grabbed me by the hand like the moon pulled the tide, and the tide pulled the sand.” –Talib Kwell

After the warlock left, I hugged my sister long and hard, but even our love could not diminish the gut-wrenching fear growing inside me like a ravenous beast whose appetite could not be quenched. We headed to her apartment upstairs.

“It’s the moon,” I explained. “It’s all about the rising of the next full moon.” I sat across the kitchen table from Cassie, in her well-appointed apartment above the coffee shop. I hoped my calm face masked the stress rippling through every cell of my body, but that was unlikely. Sister witches feel each other’s emotions almost as if they were their own.
Being the oldest of six sisters, I knew this only too well. I loved them all, but the number of feelings we share can be overwhelming at times.
I smiled at Cassie. I know I’m not supposed to have favorites, but I’ve always felt closest to her even though she’s fifteen years younger than me. Sitting close to her gave me some peace. Her heart-shaped face glowed with contentment, and the love in her green eyes slid into my heart.
Plums lay beside Sid, Cassie’s black-cat-familiar, on the floor between our feet. The two had known each other for years and seemed content to sleep cuddled-up together.
Outside, dusk ebbed into night. With a howling sound worthy of a horror movie, a northeast wind blew the clouds away from the horizon. Moonlight shone through the window and spilled over my right hand, which lay on top of the table clenching a charm bag.