Lets look at 4 important ones.

The Clavicula of Solomon is considered the grandaddy of grimoires. Purportedly written by King Solomon himself, it has a storied past. Copies were circulated in the eastern Mediterranean during the first few centuries AD, and by the 15th century hundreds of reproductions were shared between western scientists and clergymen. Knowledge within the text is said to contain the arcane wisdom from the wisest of the wise.

Considered to be a product of the French cheap grimoire boom of the 18th century, The Dragon Rouge, is basically a version of the Grand grimoire, an earlier book of magic infamous for including an invocation of the devil. (I included it because I like the name.)

The “disaster-prone balloonist” Francis Barrett published The Magus in 1801. It relies heavily on information borrowed from earlier books on magic, and became popular during the occult revival of the late 19th century.

Which brings us to The Book of Shadows (1970s), a compendium of former books on magic filled with religious text and rituals used by the neo-pagan religion of Wicca. “After the popularity of the occult studies done in the Victorian era, many of the texts gathered from the various grimoires created and unearthed at the time were then consolidated, appropriated, and in some cases straight up plagiarized to create the Book of Shadows, by Gerald Gardner.”  (Lady Alethea, Medium)  Gerald Gardner was the founder of the Wicca religion and his book of magic is used by many today.

The Why of It

There is no doubt that witch grimoires influenced religion, science, and literature. You have to wonder why? Is it the power of superstition, the persuasiveness of the people sharing them, or was there something more to it? We all love secrets and mysteries, and we all fear the unknown. Is that what pulled us to these texts?

I’ll leave you to decide for yourself.

So what’s in a grimoire? A collection of secret knowledge? Real Magic? Mystery? I’ll leave that for you to decide.

In my latest trilogy, Dial Magic, Jane Black uses spells from books, but generally she relies on the people she knows for information and her own intuition. She runs a sorcery store, and her intention is to help everyone in her community with her magic.

What could possibly go wrong? 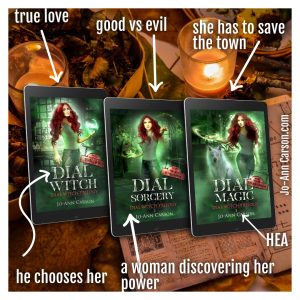