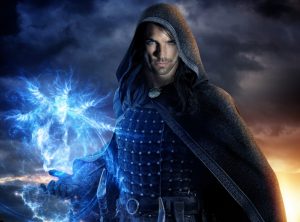 “Do not swear by the moon, for she changes constantly. Then your love would also change”.

My witch senses spiked. I folded my arms and leaned back, assessing the warlock. Donovan O’Reilly and I had met before. I guessed him to be in his late forties, and the passage of time had seasoned him well. My heartbeat hitched for a second.

Killer blue eyes dominated his perfectly sculpted face, covered with just enough scruff to make my female parts quiver. Silver strands ran through his thick, black hair, which peeked out from the hood of his cloak. His broad shoulders, thin waist, and mile-long legs made my hands itch. He was a perfect, and most delicious looking, specimen of an alpha Celtic male who would pique the interest of any witch’s passion.

Any witch but me that is. I sneered at the big, bad warlock, as one sneers at a chocolate sundae smothered with whipping cream and sprinkles when one is on a diet.

With his sword drawn, he stepped closer to the wizards and spoke. “As the supernatural sheriff of Mystic Keep, I command you to button it.”

The wizards rounded on the two of us. I felt like pond scum, useless, powerless, and as welcomed as a belching frog, standing beside the warlock.

Donavan gave me a side-glance cold enough to freeze the devil. “Behave, witch,” he said beneath his breath but loud enough for me to hear.

Behave? He told me to behave! That did it. I waved my wand dramatically in the air, creating a cascading flow of stars. I clicked my fingers, and a gentle breeze scented with night flowers blew through the room. I wiggled my nose and a puddle of seawater rose from the floor high enough to cover our ankles.

The warlock sheathed his sword and turned to face me. “Are you done yet?”

“I’m just getting started,” I said.

Despite my display of magic, the green fog persisted, and its swampy smell made my stomach roll.

To say the warlock looked unimpressed with me would be an understatement. I don’t know how the mage got under my skin so quickly or so profoundly, but he did. It must have been the long drive, I thought.

Plums chuckled softly in my head. “Yeah, right,” he said. “Blame it on the pavement.”

The hot sheriff raised his right brow, clearly waiting for me to say more.

“Did you lose your words, sheriff?” I asked.

A shadow crossed his eyes. “I don’t know what you’re doing here, witch, but let me make things clear. This is my town. And this …” He nodded towards the wizards, “is my problem.” His low voice sounded like aged Canadian whiskey on the rocks, sensual, manly, and oh so smooth. It made me hate him even more.

“My name, as you might recall, is Merlina Black. We had met twice before. I came here to …” My throat tightened. What was I thinking? I couldn’t tell him my mission in a public place.

He took a big breath, which made his chest grow even more expansive. “Well, Ms. Black,” he said, “I appreciate you trying to fix this supernatural altercation, but wizards are powerful, and …”

“Oh, wait,” I said. “Let me guess. I shouldn’t worry my pretty, little head about such things?”

The sheriff firmed his lips. “I am grateful for your powerful presence, dear witch, but, really, I have it under control. Stand down.”

I pointed to the frozen patrons holding mugs of magic coffee in the air. I nodded at the barista whose hand loomed in the middle of a hex. And I waved my fingers in the green fog. “Yeah, big guy, I see you’re in control.” Sometimes, I’m a drama queen, but not usually. It was this arrogant mage’s fault that I acted so childishly. He truly brought out the worst in me.

The warlock cursed and pushed back his hood. His Irish-blue eyes blazed with potent magic. Why are you here?”

I shrugged. “Who can explain the Fates,” I said, referring, of course, to the three fates in the Greek myth. The ones who weave our destiny at birth. By the pained look on his face, I guessed he didn’t get it.

The Daddy wizard chuckled. “So true,” he said in a gruff voice. “So true.”

His son rubbed his chin. “Fate. Perhaps, that’s our problem.”

“Hmph,” said the father. “Are you saying the universe created the trouble between us? That it’s not my fault?”

The warlock blinked and shook his head. “Let the people go,” he said to the wizards, “and I will help you talk out your differences. I am known to be a good mediator between our folk.”

“Good gravy,” I said. This guy was too Boy-Scout to be true. “Can’t you throw them in jail and charge them for withholding coffee from the people, or something.”

Another frightful side-glance came my way, but I let it roll over me like an ocean wave and answered it with an eye-roll.

“Not in my town,” said the warlock. “Strange witches, no matter how powerful they are, don’t step in and take control. Not in my town.”

The father wizard chuckled. “I think we should go, son,” he said.

As the warlock held me in a death-stare, the wizards vanished in a puff of smoke, the air cleared, and the sound of the espresso machines resumed. Everyone stared at us.

I held the sheriff’s gaze. Damned if I would be the first one to look away.

Through the din, I heard the clicking of high heels approaching.

“Welcome, sister,” said a voice familiar to me. My sister, Cassie, put her hand gently on my back.

When I didn’t respond, she added, “I see you’ve met our law and order. You remember him from the wedding, don’t you?”

The warlock groaned and broke his stare. “My name is Donovan O’Reilly, and I am the supernatural sheriff in this town.”

As if I didn’t know that already. Ignoring him, I looked at Cassie. “I came to speak with you about an important matter.” I gave the big, bad warlock a dismissive look. “That is if I’m not under arrest.”

The sorcerer’s riveting, blue eyes flashed with magic. “not today,” he said. “Maybe next time.” He pulled his cloak together and vanished.

Available for Preorder from Amazon 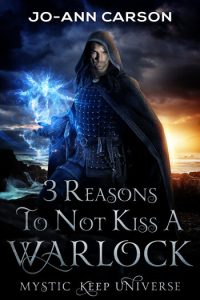 Powerful magic drew me to a cozy, Pacific Northwest town called Mystic Keep, a sanctuary for witches and warlocks. It’s the sort of place where things go bump in the night—every night—and anything can happen. But that’s not what scared me.
My name is Merlina Black. I’m a middle-aged witch who has been around the block on a broom. That is to say, my dreams of finding true love died long ago. When I met the deliciously-handsome warlock, Donovan O’Reilly, my heart sputtered. That’s what scared me.
I looked for solid reasons he couldn’t be the one. After all, I was old enough to know there’s no such thing as a soulmate, old enough to know love ends in tragedy, and definitely old enough to know sexy warlocks spell trouble. But, something about this mage short-circuited my circuits, stirred my cauldron, and hexed my hormones.
Since bad luck and good magic happen in threes, I figured the cure for my lusty infatuation was to find three reasons to not kiss him. Smooching any warlock is dangerous; lip-locking with this one would be terminal.
Donovan O’Reilly, the town’s supernatural sheriff, enjoyed his life as a single dad before he met me, but everything in both our lives was about to change. Danger lurked at the edge of town. When he asked me to join him to conjure a wee bit of magic, sparks flew.
Will our shared magic be strong enough to save the town? And will I find a reason not to kiss him?
This is a steamy, stand-alone, supernatural-romance set in the Mystic Keep Universe. If you like paranormal woman’s fiction, witchy romance with a side of humor, and/or a slice of saucy urban fantasy, you’ll love this story.