Getting thoroughly lost in funny mysteries and cozies is one of my guilty pleasures. I thought I’d post a short review for three books I’ve read recently. I’ve placed them in the order I read them, because I wouldn’t dream of trying to rank these gems. They are all ten-star-reads to me.

Murder by Fireworks, A Kay Driscoll Mystery, by Susan Bernhardt 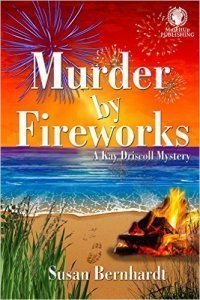 If you like sweet, cozies filled with mystery, suspense and pastry, you’ll love Susan Bernhardt’s Murder by Fireworks. It’s set in the fictional, small town of Sudbury Falls . A thoroughly-disliked man is murdered and amateur sleuth, Kay Driscoll doesn’t trust the police to figure out who did it. It’s a classic who-donnit with a short list of colorful suspects, opportunities for murder and evil intentions. A thoroughly good read.
I love Bernhardt’s descriptions of characters. She nails them with a few sentences. For example when she introduces Deirdre, Kay says that the woman, “…was my spiritualist best friend, next door neighbor, and gardener extraordinaire who opened a New Age herbal shop on the spring equinox.” Don’t we all know that person?
I also love the subtle, dry humor that flows through the plot seamlessly. For example the story opens with a wedding Kay is hosting for her son. Of course she is not supposed to do all the work. “Rose [the bride] had enlisted one of her friends as the wedding coordinator. So far I hadn’t met her.” What hostess can’t relate to that?
There’s no graphic sex and little violence in this story. But there is lots of love between friends, family and mates. It’s a heartwarming mystery that will leave you smiling.
(Click on the cover for the buy link) 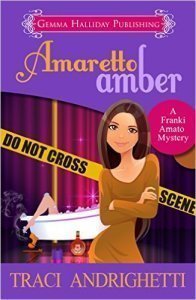 Get ready to laugh until you cry.
Traci Adrighetti’s, Amaretto Amber is a fast-paced, romantic comedy. It’s the third I’ve read in her series and I’m totally addicted.
Franki Amato is an ex-cop who lives in New Orleans and works with her best friend in a private detective agency called Private Chicks Inc. Her landlady Glenda is a feisty  sixty-one year old retired stripper who decorated Franki’s apartment with bordello furniture. And did I mention she lives across the street from a graveyard? Voodoo, eccentric characters and Louisianna charm permeate her stories.
In Amaretto Amber a stripper has been murdered and Franki goes undercover in the strip club to find the murderer. But life is never easy for Franki. She just turned thirty and her very-Italian mother and nonne turn up on her doorstep to do all they can to get her married. Her boyfriend’s job at a bank is compromised and she’s worried that it’s her fault. Was Voodoo or witchcraft involved in the murder? Anything is possible in Franki’s world.
Who wouldn’t love the clutsy heroine Franki Amato who has had more than her share of bad luck (especially with men), but keeps a wicked sense of humor? You cheer her on through one mess after another.
One of the main sources of humor is Franki’s eccentric and unpredictable landlady Glenda. You never know what she will do, say, or wear next. Her first introduction: “Along with the cigarette holder and the set of black wings, Glenda was clad in a studded black leather micro tirangle top, a tiny tutu and thigh-high boots. I couldn’t decide if she looked like a winged Hell’s Angel or a geriatric Victoria Secret’s model whose wings had been clipped.”
I highly recommend Traci Andrighetti’s Franki Amato series, but to get the whole story I would start with the first one, Lemoncello Yellow, which is being made into a movie. They are light and fun. There’s no graphic sex and little violence in them.
(Click on the cover for the buy link) 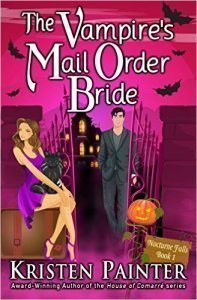 Krisent Painter’s, The Vampire’s Mail Order Bride, is a funny, romantic, feel-good story with a charming vampire. It had me laughing out loud every few pages and I read it in one sitting. Kristen Painter is a master storyteller. Her prose flows like silk, her pacing is perfect and her characters are outrageous. No wonder it’s a best-seller!
Running from the mob, Delaney James lands in a vampire’s mansion and pretends to be his mail-order bride. Hugh Ellingham, the four-hundred year old vampire, doesn’t know her true identity and she doesn’t know he’s a blood-sucker. Throw in Hugh’s conniving grandmother who wants grandchildren, a witch’s curse, a few werewolves and mob hit-men and the suspense never ends.
The story is set in Nocturne, a tourist town run by paranormal creatures of all sizes and shapes that celebrates Halloween every day of the year.
I found myself on the edge of my seat wondering what could possibly happen next. I strongly recommend this book for anyone who wants a fun, carefree read.  It’s a sweet romance with no graphic sex and little violence.
(It’s free!!! Click on the cover for the buy link)

I’ll be putting my reviews up on Amazon and Goodreads today along with five star ratings. I only give 4 or 5 btw. If I feel a book rates lower, I don’t review.

And that’s what I’ve been reading on the beach this summer. How about you? What’s in you beach bag?