I’m writing a series of posts reviewing parts of Steven Pressfield’s book, Nobody Wants to Read Your Sh*t. Today I’m focusing on the importance of knowing your genre. This topic really hit home with me, because I write cross-genre stories, which can be a bit like transversing no-man’s land. This is what Pressfield says:

“Genre may be the most important single factor, from writer’s point of view, both in crafting the work and in attempting to find a market for it.” (Pressfield, p. 62, Nobody Wants to Read Your Sh*t)

So true. My stories h0ld together, but marketing them has been difficult. I read farther.

“… every genre has its own ironclad, unbreakable rules.”(Ibid)

But I love breaking the rules. Isn’t that what creating is about. I read farther.

“The writer must know what genre he is working and the conventions of that genre, just as the bridge builder must understand the science of foundational integrity and the means of mitigating stress on strung steel.” (Ibid., p. 63)

“Because a story … is experienced by the reader on the level of the soul. And the soul has a universal structure of narrative receptors.
Jug was right. There is a collective unconscious. Joseph Campbell was right. Myths and legends do constitute the fabric of the self.
The soul judges a story’s truth by how closely it comports to the narrative templates that are part of our psyche from birth.”(Ibid.)

My gut hit the ground, when I read this. What about people like me who want to mix things up?

“It’s okay to blend genres (in fact, it’s great if you can pull it off), but before we do that, we the writers must know the rules of th genre as well as a brain surgeon understands the topography of the cerebellum and the synaptic architecture of the neocortex.” (Ibid., p. 64)

Ouch. I mean, “Ouch!” I thought I was just meddling with tropes. I have been writing Romantic Suspense, which crosses two genres and is so popular it has rules of its own. My hope was to draw two audiences (i.e., romance and suspense readers). I also thought the double genre would layer and enrich my concept. But I’m beginning to think I was not only arrogant, or perhaps overly-ambitious would be a nicer term; but I was also stupid. I do not fully understand the “cerebellum” of either genre well enough to pull it off. I do have my fans, but I also have my critics. Some Romance readers wanted more declarations of love and white-picket-fence-nirvana at the end of my stories (particularly mainstream Romance publishers), while some suspense readers I imagine wanted more suspense and fewer tender-eye exchanges.
Back to my writing loft. What I’m working on now is in the realm of speculative fiction, a post-apocalyptic, paranormal romance. The first draft is a “blend” of the two. This time, I plan to take extra care to meet the genre rules of both, or develop and sell it only as only one. Something to think about. Hmm.
Anyway, those are my thoughts on this part of Pressfield’s book, which as I keep saying, is fantastic.

I believe it is still free too: Free Link 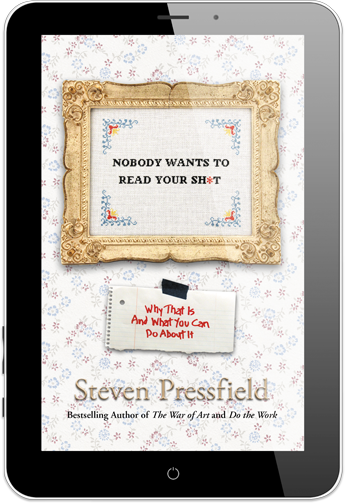