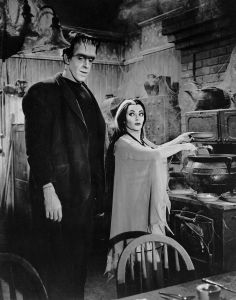 The Munsters, from Wikipedia
As a skinny, scrawny eleven-year old I had a passion for the unexpected. I fantasized about it day and 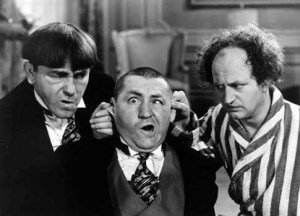 The Three Stooges, Wikipedia
night, and fully expected, if I wished hard and long enough, it would to arrive on my apartment doorstep in Toronto. Maybe I had watched too many episodes of The Munsters with the dismembered hand, or enjoyed the antics of the Three Stooges a wee bit too much. Or maybe my infatuation with Spock scrambled my brain in a Vulcan mind probe cast through our old TV set. Who knows? But in the mid-sixties, when apple-pie-normal was the rage, I wanted something different.
What exactly?
Anything that would add texture to my suburban life of going to school and returning home again with the same pile of boring text books. I day-dreamed a lot.
Setting aside my crush on Antonio, the drop-dead gorgeous, Greek boy who sat at the front of my row in English class, my biggest interest in life at this point was swimming. I trained five days a week downtown with a competitive swimmers’ club called USAC (University Settlement Aquatic Club).  Our eccentric coach loved the Led Zepplin, drove a dome shaped Volvo and had a day-job as an architect. He was a man of few words. Besides, “Ready…Go,” he said little. So when he did say something we listened. My favorite line was: “You don’t want to be mediocre.” It has stuck with me. He was ultra-cool in my eyes, a beatnik coach with a black turtleneck shirt and a whistle.
For me belonging to a swim club wasn’t about perfecting my butterfly. The girls had regular sleep-over parties and we laughed through the night. Even though we came from all over Toronto and were from poor to rich homes, we bonded and shared our secrets. It was like a sisterhood. Of course there was training too. My times improved, but I wasn’t championship material and I quit when I turned thirteen, because getting rides to the pool became harder and my interests moved on.
My older brother went to the Nationals his first year and represented the country the following year at an international event. He then went on to get a scholarship and win a tons of medals. He says it was his good lungs that made him so fast, but it was more than that. Big-Bro trained hard and had a winning mindset. He always had it and still does.
I admired the heck out of my big brother and still do, not because he can swim fast, though I liked watching him win, but because he has an enormous heart. Don’t tell him I said that. He pretends to be tough like men do, but I know the heart that beats beneath his skin.
So at age ten when I couldn’t master the back-flip turn, he gave me a private lesson. Today backstrokers flip over to their fronts and do a regular flip turn, but in those days we had to do a back-flip turn.
“It’s easy,” he said. “Come here, I’ll show you.”
I followed him into the kitchen, which smelled of peanut butter and my Mom’s instant coffee. He pointed to the linoleum on the floor.”Lie down.” Now this is when I should have told him he had swallowed too much chlorinated water, but instead, I followed his instructions.
“Pretend the fridge is the end of the pool.
Fridge? “Okay. Got it.”
“Push yourself along the floor, as if you are gliding into the wall. Extend your arm and put your hand on the fridge.”
Got it. Hand on fridge.
“Now kick up with your legs and turn yourself around so your feet are on the fridge.”
I kicked up, swiveled and my feet landed on the fridge. Every bone in my skinny body raked over the unforgiving floor.
“Now push.”
I pushed. Voila. I now understood the back-flip turn. My body understood the back-flip. Heck, my bones understood …
My epiphany? Never do a back-flip turn on the floor, even if Big-Bro suggests it.
Now, this may not seem like such a big revelation, but it was for my pre-pubescent self. I learned that I needed to think before I let someone talk me into things.