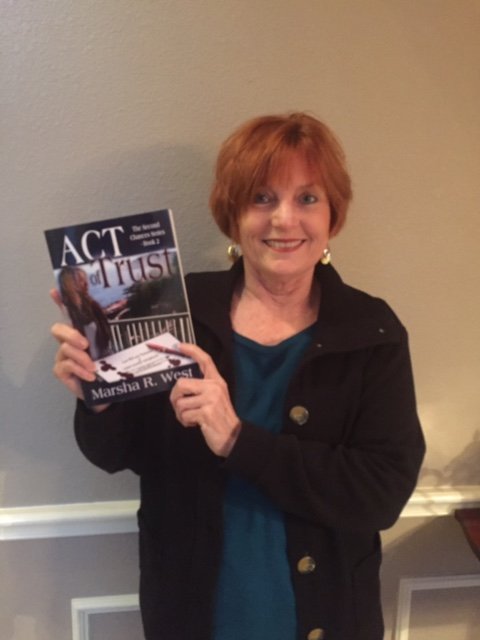 Thanks for having me Jo-Ann. You asked why ACT OF TRUST was a personal story to me. Here’s the answer.

If you’re of a certain age, 9/11 resonates with you in the way Pearl Harbor did with the Greatest Generation.

We all know where we were when the planes hit the towers. Many lost loved ones or acquaintances, and we all have our stories. My younger daughter and her husband moved to New York City on Sunday 9/9.

On Tuesday morning, September 11, as the principal in an elementary school, I’d arrived at my regular time, around 7:15 to get a jump-start on the day. My husband normally left later for his downtown office to miss the traffic. He never went in that day after receiving a call from a good friend telling him to turn on the TV.  Avoiding high-rise office buildings seemed a good idea.

Trying to keep staff, kids, and parents calm in the face of what we didn’t know took my focus. I kept my cool until my assistant principal brought it to my attention that some teachers thought it a good idea to let their students watch the events on TV. Even from a historical perspective, I saw no reason for this especially for our kindergartners and first graders. I directed all TVs turned off around children.

Speculation was rampant as we all wondered if WWIII had begun. Nerves frayed. Tempers flared. Tears fell.

Parents flocked the school to take their children home. Whether they’d be safe there or not was immaterial. They wanted to have their family close. Making sure students went with the right person was a priority for my staff. A crisis makes a good opportunity for a non-custodial parent to take a child they don’t have the right to. That would’ve just added strain, stress, and fear to an overloaded situation. We were thorough even when parents wanted us to hurry.

Our school was near an industrial area with large oil containers and a railroad track ran near. At this point, our disaster practices included only fire and tornado drills. My imagination painted dreadful pictures of those tanks exploding.

My daughter and her husband had gone their separate ways that morning. He rode a train to Connecticut where he did marketing for a theatre company. My daughter took a train toward the theatre district to begin rehearsals for a show. When she came up out of the subway, a dust-filled sky met her eyes and people crowded the streets heading uptown. She and her husband didn’t see each other until early evening, but they talked.

It was three that afternoon before I knew they were all right. So, you see ACT OF TRUST is a personal story to me. I was one of the very lucky ones. My family was okay.

Maybe that’s why I so admire those who’ve gone on after losing a loved one in this tragic experience. I can’t imagine it, though, as a writer, that’s my job. My intent was to honor their loss and commend their courage. I hope people find comfort in the happily ever after ending of this story.

I will send a portion of the sale of each book to the 9/11 Memorial Gardens and Museum. If you care to donate directly, as well, here’s the link: http://www.911memorial.org/

A widow since 9/11 and a mother of grown daughter, Kate Thompson wants to
keep her and her daughter safe, but the inheritance of land in Maine pushes her out of her comfort zone in Texas and into the arms of a Maine lawyer.

Maine lawyer and environmentalist, Jim Donovan wants to protect Aunt Liddy’s land and keep it from falling into the hands of the developers, but first he has to convince Kate Thompson she should hold on to the family land when she doesn’t even want to go look at it. However, he’s unprepared for the attraction each feels for the other, but denies exists.

Will they be able to settle the land deal before anyone else is killed or they break each other’s hearts?

Mildred stopped and nailed Kate with a beady-eyed stare. “You do plan to turn over the Thompson land to the Conservancy Trust, don’t you?”

“I don’t know yet, Mildred. My daughter’s coming to visit, and then we’ll decide together what we want to do with the land. It’s possible she’ll want to keep it in the family. Be a nice place for her to get away from the hectic-ness of New York City.”

“Liddy would be pleased with either the Trust or you keeping it in the family, but she’ll haunt you if you sell to Holland.”

Kate leaned away. The venom in the woman’s tone made Kate’s heart rate trip up and her hands grow sweaty. Mildred completely believed her statement, enough to cause Kate nightmares.

“She’s giving every option plenty of consideration,” Jim jumped in. Was he afraid Mildred’s hard sell would reverse Kate’s leaning in his direction?

MuseItUp Publishing released her first book, VERMONT ESCAPE in July 2013; her second book, TRUTH BE TOLD, in May 2014. In the Fall of 2014, Marsha formed MRW Press LLC to provide a print versions of her books. SECOND ACT, Book 1 of the Second Chances Series follows up with a secondary character from VERMONT ESCAPE and begins a four-part series. ACT OF TRUST is Book 2 of the Second Chances Series.

She’s had lots of fun doing book club presentations. If you’re interested, you can contact her at marsha@marsharwest.com or through her web site http://www.marsharwest.com  or at http://sistersofsuspense.com/

My Review on Amazon and Goodreads

She Needs to Trust Him
The heroine Texan, Kate Thompson is a strong, mature woman with a heavy heart. Tormented by the loss of her husband in the 9/11 terrorist attack in New York City she hasn’t been able to become involved with another man.
Kate describes the hero, lawyer Jim Donovan as a, “hard-boiled Yankee with a hint of Maine Accent.” As a reader I fell in love with him immediately, because he is so honest and caring.
Kate inherits land in Maine, which she intends to sell. It’s the practical thing to do. Jim wants her to sell it to the Maine Coast Conservancy Trust, but they are offering a tenth of the money the realtor who wants to develop the land has offered. Jim convinces her to come with him to see the land before she makes a decision.
It begins as a tender love story as these two strong characters with opposing goals are drawn together. Sparks fly. But wait, things are not what they seem. I don’t want to spoil the story here, but I will say that as the mystery behind Kate’s aunt’s death becomes clear, the momentum of the story picks up and it becomes a page turner. I rooted for Kate all the way.
A great read. If you believe in second chances, you’ll love this story.