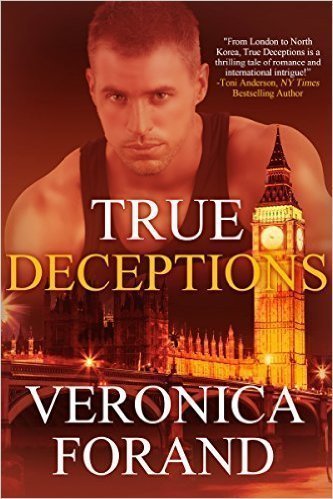 Veronica Forand’s action-packed, Romantic Suspense thriller, True Deceptions is a phenomenal read. I can’t think of a better word to describe it. I couldn’t put it down.

The opening chapter is brilliantly written, rivalling the openings of James Bond movies. Filled with emotional drama, well developed characters and conflict it leaps off the page. I won’t give any spoilers, but I will say she had me within a few pages.

And Californian, Cassie Watson, a peace-loving, vegan, computer nerd turns out to be his perfect match. Simon describes her as, “…a brain in a centerfold’s body.” He tries not to notice the leggy blonde too much, because he has a huge assignment to complete, but he can’t help but note, “…her looks could disarm a man even if her fighting skills couldn’t.” And, “…She could break the concentration of a Tibetan monk!”

The heat between them sizzles.

The secondary characters are equally intriguing. The plot is fast paced and has surprising twists. Even though the subject is dead serious, Forand’s rich sense of humor plays through the dialogue deepening the texture of the plot and the tone of the novel.

I’m going now to Simon’s Facebook page. I’m totally his fan. Then I’m putting up this review on Amazon and Goodreads and giving it 5 stars.

My favorite line: “Crawling around in the mud and digging a ditch under a hidden section of barbed wire fencing were not his favorite activities, but he’d walk through molten lava to bring Cassie to safety.”