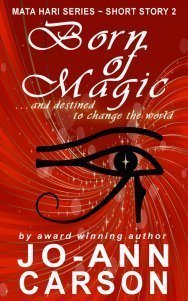 Arms dealer, Bakari al-Sharif selects a quaint cafe in Amsterdam to close his biggest deal ever–only to have his celebration clouded by his brothers’ warnings about Djeserit. Is she an Egyptian sorceress offering wisdom and power? Or a manipulative con-artist seeking only to help herself? What does she want from Bakari? Almost twenty years later the secret is revealed, but the truth only leads to more chaos. Another great addition to the Mata Hari series!

A spy’s life isn’t easy. Old and new enemies, including a Greek millionaire with a flair for technology, decide to target Sadie Stewart’s loved ones in order to get close enough to the beautiful super spy and kill her. Complications increase when Sadie discovers being a spy runs in her family. Next-door neighbor Beatrice adds loads of flair to an already diverse and intriguing cast. And then there’s the sexy giant of a Dutch man who’s a perfect match for Sadie… I hope this series never ends!