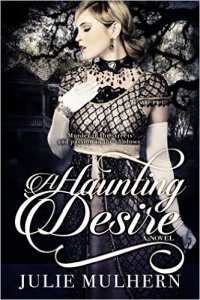 A Haunting Desire is a compelling paranormal, historical, romantic-suspense set in New Orleans in 1902. Julie Mulhern’s sensuous, almost lyrical prose draws you into a world of shadows and suspense, where ghosts whisper clues and death waits around every corner. It opens with the lines: “Go to Marie Leveau’s tomb. Find the woman who can tell you about voodoo. She has what you need.” The pace is steady and suspenseful.

Someone is killing men in Storyville, the red light district.

Trula Bourdeaux  runs the classiest whore house in town. A strong and worldly woman with a heart, she takes good care of the people  who work in her establishment, but she doesn’t let any man touch her body or her heart. Growing up in a long line of courtesans she believes there are rules that cannot be broken. She quotes her grandmother, “Ladies had the luxury of loving. Courtesans did not. A courtesan who fell in love was a fool.”

As the violent murders draw closer to her house, she must find the murderer. Unfortunately her best chance of success involves teaming up with the drop-dead-handsome Yankee , Zeke Barnes, who’s “whiskey rough” voice is “dark and tempting and forbidden.” Not to mention the rest of him. He creates a hurricane of feelings within her she doesn’t want to deal with. Not now. Not ever.

Zeke Barnes is the man who reaches and captures Trula’s heart. He’s been sent to New Orleans, because he specializes in cases involving the occult. Trula’s beauty, strength and character draw him like a magnet and he can’t resist her.

Neither believe they can have a future as a couple, but their love and their passion tell a different tale.  The intensity of their steamy romance takes them both by surprise.

Together they set out, with the help of a few ghosts, to unravel the mystery of the murders.
Mulhern’s rich language, vivid imagery and complex characters flavor a well plotted story perfectly. A great read.

“Until he caught the murderer, he couldn’t leave, couldn’t escape this ghost infested, mosquito-ridden swamp masquerading as a city.”
“There was something prowling in the approaching night, something dark and hungry.”

I’m posting my review on Amazon and Goodreads with 5 stars. If you like mysteries set in New Orleans like I do, you’ll love Julie Mulhern’s, Haunting Desire.