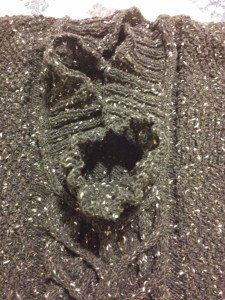 Hobbies are supposed to relax you, or so they say. People adopt hobbies to pass time. Many secretly hope it will transform them in some personal way. Others simply want an escape from the rest of their lives. Hobbies are like mini-vacations. I think we all want more of them. Consider the words of Anais Nin:

I’ve tried different hobbies over the years. I’ve painted pottery, hooked rugs, sewed clothing and practiced piano until the neighbors told me to stop. But the one hobby I keep coming back to is knitting. Not that I’m good at it, but because it runs in my blood. I come from a line of women who knit well. My mother and sister could and can knit anything. Beautifully. They create pieces of art. I didn’t inherit their talent, but I did get their desire to create woolly things. Or…  maybe it was watching them spend hours in bliss with needles that made me want “some of that.” At any rate, I keep coming back to knitting.

At its best, knitting is an active form of  meditation. The needles work in and out of stitches, one at a time,  in a smooth, clicking  rhythm. The mind focuses on one repetitive movement at a time, the body relaxes, synergy flows… It can be relaxing, restorative and enriching.

And sometimes this meditative-like practice results in a beautiful creation. But… not always.

Let me take you back to last winter.  I bought a bag of black Aran wool at a post-Christmas sale. Despite the discount, the wool cost a good chunk of money, but that’s okay I told myself. I will make something extraordinary with it. 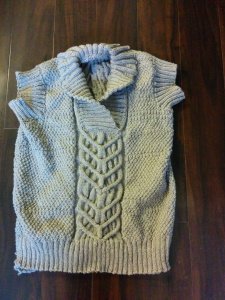 My plan was to make a cable-knit vest, like the one I had just finished (see right pic). It keeps me warm and cozy on damp mornings in my writing loft.

About four inches into the project, I realized the black wool didn’t knit up like the first wool. The sweater was looser and larger. Yeah, yeah, I know. I was supposed to knit a test square, but who follows the rules? I never do. So, instead of doing a test patch and starting over, I sighed and decided my extra-large vest would be extra-extra-large. That would be okay, I told myself. It would be super comfortable and never scream: “Go on a diet.”

I knit the back and the front, then sewed up the side and shoulder seams. I picked up stitches and made cap sleeves. It had a large squarish look to it, but I still loved the cable design and  kept my hopes up–that despite what I saw in front of me–  by some hobby-magic the pile of misshaped wool would transform into something.

Then came the final stage- knitting the shawl collar. I picked up the stitches and set to work. The collar took shape. An odd, really odd, shape. I hmmed and hawed, but I figured it had to be a quirk of the black wool. I decided that once it was finished I could block it and all would be well.

But when I finished it, it looked wrong. Really wrong. That’s the only word for it.

Unable to face it, I threw it in a drawer. I mean who wants to fail at a hobby? Six months of knitting and I’d made a monster. It hid for three days.

PJ asked me what happened to the black sweater. I said, “Oh, I’ll show it to you later.” He narrowed his eyes, but knew better than to ask more questions.

There was no saving my woolly monster. Biting my lip, I pulled it out to face it again. I had to figure out what went wrong. I hoped it wouldn’t look as bad as I had remembered it.

It didn’t look as bad. It looked worse.

I turned it one way, then another and another. Upside down… inside out… Finally I figured it out. I had knit the collar on backwards. What I thought was the back was the front. If I reversed the sweater the body part fit, but the collar went wonky.

I could pull the stitches of the collar out, but… My record of pulling out knitting isn’t good. I lose more stitches than I save. What a disaster.

So, I decided to be creative. At some point in the future, because I don’t want to look at it right now, I will sew the front of the collar together, so it’s wearable. The back may look odd, but at least the sweater will fit. That’s the best I can do.

Moral of the story: Sometimes when you create things they get away from you. Hey, just ask my villains. I have a hell of a time killing them. 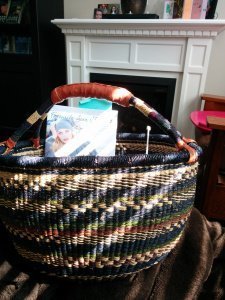 To make myself feel better I bought more wool, a lovely blend of alpaca and nylon. A kind of climbing-back-on-your-bicycle thing mixed with basic retail therapy. I also picked up a gorgeous basket from Africa to give it a home. 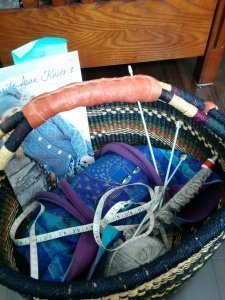 Hopefully, I’ll have better luck this time round.

And that’s my Monday Mistake post for this week.

“Anyone who has never made a mistake has never tried anything new.”
― Albert Einstein

How about you? Do your hobbies get away from you? Any stories?

0 Replies to “My latest hobby mistake”