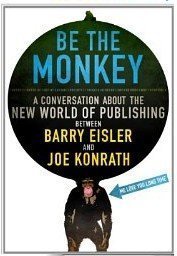 “The only really necessary people in the publishing process now are the writer and the reader!”

Be the Monkey is a 35,000 word on-line discussion between two articulate, refreshingly irreverent and extremely intelligent writers about the current state of publishing.

“Barry Eisler spent three years in a covert position with the CIA’s Directorate of Operations, then worked as a technology lawyer and startup executive in Silicon Valley and Japan, earning his black belt at the Kodokan International Judo Center along the way. Eisler’s bestselling thrillers have won the Barry Award and theGumshoe Award for Best Thriller of the Year, have been included in numerous “Best Of” lists, and have beentranslated into nearly twenty languages. Eisler lives in the San Francisco Bay Area and, when he’s not writing novels, blogs about torture, civil liberties, and the rule of law.” ( bio taken from his website)

I love his John Rain novels.

“Joe Konrath has sold more than three million books in twenty countries. He’s written twenty-four novels and over a hundred short stories in the mystery, thriller, horror, and sci-fi genres. Known for combining incredible action, hair-raising scares, and big laughs, Konrath has received over 10,000 Amazon reviews for his work, averaging 4.2 stars out of 5. He’s been a #1 Amazon bestseller on three different occasions, and has been in the Top 100 bestseller lists over twenty times. He’s twice won the Love is Murder Award for best thriller, and has also won the Derringer Award, and the Ellery Queen Readers Choice Award, and has been nominated for many others including the Anthony, Macavity, and Gumshoe. Konrath edited the collection These Guns For Hire, and his fiction has appeared in dozens of magazines and anthologies including Ellery Queen, Alfred Hitchcock, Cemetery Dance, The Strand, Thriller edited by James Patterson, and Wolfsbane & Mistletoe edited by Charlaine Harris (True Blood).
He’s considered a pioneer in self-publishing. His blog, A Newbie’s Guide to Publishing, gets several million hits per year, and Konrath has been featured in Forbes, Entertainment Weekly, Newsweek, Playboy, USA Today, Time, Woman’s World, the LA Times, and the NY Times among many other periodicals. He also blogs for the Huffington Post.” (taken from his website)

Thought provoking and funny, this book is well worth its 92 cent price. I wouldn’t attempt to summarize it as it rambles in meaningful ways in different directions, but I will tell you the key points I took away:
1. The publishing industry is in the midst of transformation and it’s messy.
2. There are a lot of advantages to self-publishing.
3. The traditional, or as Eisler calls them legacy publishers, are scrambling to redesign their business models to be competitive in the current market conditions, but perhaps not fast enough. They tend to put the price of e-books way too high to support their losses in print publishing, but then the books don’t sell. As a result, a lot of writers are choosing to go it alone, because for them it makes economic sense.
An interesting read.