3 Quotes from One Hundred Years of Solitude - Jo-Ann Carson 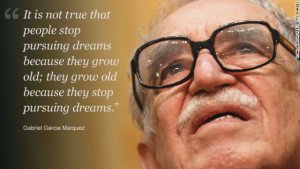 “With the passing of Gabriel Garcia Marquez, the world has lost one of its greatest visionary writers — and one of my favorites from the time I was young.”

Bill Clinton
“I was saddened to learn of the passing of Gabriel Garcia Marquez. From the time I read ‘One Hundred Years of Solitude’ more than 40 years ago, I was always amazed by his unique gifts of imagination, clarity of thought, and emotional honesty. He captured the pain and joy of our common humanity in settings both real and magical. I was honored to be his friend and to know his great heart and brilliant mind for more than 20 years. My thoughts are with Mercedes and his family, and with his friends and admirers in Colombia and around the world.”
Me:
Hard to top those two comments. All I can say is that I love the book and along with the rest of the world of readers grieve our loss. Marquez died on April 17th.

The Story of the Book, One Hundred Years of Solitude

“Since García Márquez was eighteen, he had wanted to write a novel based on his grandparents’ house where he grew up. However, he struggled with finding an appropriate tone and put off the idea until one day the answer hit him while driving his family to Acapulco. He turned the car around and the family returned home so he could begin writing. He sold his car so his family would have money to live on while he wrote, but writing the novel took far longer than he expected, and he wrote every day for eighteen months. His wife had to ask for food on credit from their butcher and their baker as well as nine months of rent on credit from their landlord. Fortunately, when the book was finally published in 1967 it became his most commercially successful novel, One Hundred Years of Solitude, which sold more than 30 million copies. (Cien años de soledad) (1967; English translation by Gregory Rabassa 1970). The story chronicles several generations of the Buendía family from the time they founded the fictional South American village of Macondo, through their trials and tribulations, instances of incest, births and deaths. The history of Macondo is often generalized by critics to represent rural towns throughout Latin America …

This novel was widely popular and led to García Márquez’s Nobel Prize as well as the Rómulo Gallegos Prize in 1972. William Kennedy has called it “the first piece of literature since the Book of Genesis that should be required reading for the entire human race,“ and hundreds of articles and books of literary critique have been published in response to it.” (Wikipedia)

0 Replies to “3 Quotes from One Hundred Years of Solitude”