The Krikey in my Life - Jo-Ann Carson 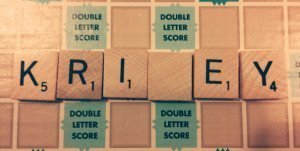 When I’m deep into a story I write and write and write until I empty all the images and scenes rumbling around in my head onto the screen. Then I come up for air. I don’t worry about the individual words in my first draft. I become ‘obsessed’ later. lol.
A couple of years ago, I asked JC to critique a part of my first story, an action packed romantic suspense about a brazen gun-toting teacher, a handsome sociopathic villain, a drool-worthy hero and a stolen Rembrandt. Yeah, it’s complicated.  The story mostly works, and I’m trying to see if I can save it from being forever cast under my proverbial bed.
This was the first time she’d critiqued my work. She told me in carefully chosen words that she liked the plot. We weren’t at the comfortable stage of just plowing into ‘the thick of it’ yet.
“But,” she said, “but,” and she paused. I’m sitting on the edge of my seat wondering what her next words will be. Is my heroine not strong enough? The sensual tension too timid? Maybe my settings aren’t clearly described…
“You use the word krikey,” she hesitated, “too much.” JC isn’t the kind of woman who hesitates when she speaks.
Krikey? I guess I had used it. I smiled.
“Do you know anyone who uses the word ‘krikey?'”
“Uh, no.” I started giggling.
Then she read some excerpts, and they were truly hilarious. To avoid swearing I had my heroine dropping ‘the krikey bomb’ all over the place. She laughed with me. And then she read me some more lines. It all sounded so silly I laughed harder, tears welled up in my eyes and I had to cross my legs.
“And Mom,” she paused, “No one my age says krikey.” That did it. We both broke into deep gut-busting laughter. Just the thought of a thirty year old saying, “Oh Krikey,” when a bad guy pulls a knife on them was more than ridiculous.
Our husbands downstairs yelled up, “What’s going on?”
So I stopped using the word ‘krikey’, unless of course I’m totally lost for a word and want a filler. JC and I have become close critique partners. ‘Krikey’ kind of sealed the deal. There’s nothing like laughter to forge a bond.
So that’s my Krikey story.

Your turn. Do you catch yourself putting weird words into your prose? Do you laugh with your critique partners? Ever used the word: Krikey?

0 Replies to “The Krikey in my Life”