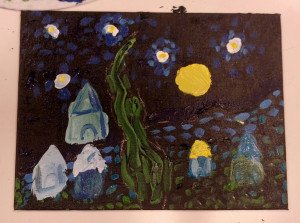 I’ve spent the last week visiting with two of my grandchildren. Here are a few of my stories:

The Engineer of Hearts 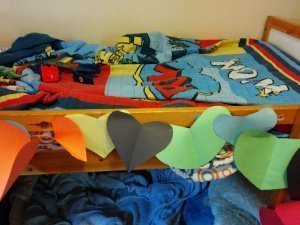 Four year old, CJ’s blue eyes widened as he watched his big sister make hearts out of folded paper. Pure magic. Carefully he chose colored paper, and with the concentration befitting a brain surgeon he cut his own big hearts.  He says the word big with great emphasis, like he’s describing a dinosaur. He held his breath every time the scissors closed on the paper and let out a little yelp when he completed each one.
His sister wrote poems on her hearts. He dug out a stapler and built a long train to surround his bed. C.J. – the Engineer of Hearts.

As I drank my morning coffee, bright-eyed CJ explained how the remote control worked for his truck. I gather it has to do with elect-tricksy which flows through the string. Not bad. I wasn’t about to teach him  how to say it right. His passion for knowledge warmed my tired brain.

It’s all About the Hearts

Six year old CR loves everything about life, and expresses her joy in art. She made piles of colorful hearts for her friends. She made a special one for Oma and Opa and wrote:

And so are you

I love children. They humble me and make me feel real.

Your turn. Any favorite kid stories?

0 Replies to “Starry Starry Night and Other Stories”