Starfish along the west coast

“With thousands of miles of coastline in North America, scientists can’t be everywhere at once to keep an eye out for sick and dying starfish.

“We suddenly need the fine scale, widespread data that only citizen science will be able to provide us,” said Drew Harvell, a marine epidemiologist at Cornell University, who has been coordinating the research into the mysterious mass die-offs of starfish, … up and down the West Coast of North America.” (Katie Campbell, Way Points Blog, KCTS, Jan. 30, 2014)

Concerned individuals are looking for sick star fish and mapping their location:

“… a sick starfish website [has been set up] for tracking posts to social media sites like Twitter and Instagram. If divers, tidepoolers or beachcombers snap photos of starfish and add the hashtag #sickstarfish, their reports will automatically upload to the map.” (Ibid) 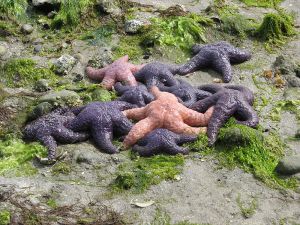 They, “…are among the most familiar of marine invertebrates. ..typically have a central disc and five arms, though some species have more… The aboral or upper surface may be smooth, granular or spiny, and is covered with overlapping plates. Many species are brightly coloured in various shades of red or orange, while others are blue, grey or brown. Starfish have tube feet operated by a hydraulic system and a mouth at the centre of the oral or lower surface. They are opportunistic feeders and are mostly predators on benthic invertebrates… They have complex life cycles and can reproduce both sexually and asexually. Most can regenerate damaged parts or lost arms and they can shed arms as a means of defense. The Asteroidea occupy several significant ecological roles. Starfish, such as the ochre sea star (Pisaster ochraceus) and the reef sea star (Stichaster australis), have become widely known as examples of the keystone species concept in ecology.

The fossil record for starfish is ancient, dating back to the Ordovician around 450 million years ago, but it is rather poor, as starfish tend to disintegrate after death. Only the ossicles and spines of the animal are likely to be preserved, making remains hard to locate. With their appealing symmetrical shape, starfish have played a part in literature, legend, design and popular culture. They are sometimes collected as curios, used in design or as logos, and in some cultures, despite possible toxicity, they are eaten.” (Wikipedia)
***
PBS Report:

Not very long ago, a visiting friend told me that what she loved most about island life is its slow pace. “We had time to watch star fish roll over,” she said. Her words echo in my mind.

I want my great-grandchildren to be able to watch star fish too.