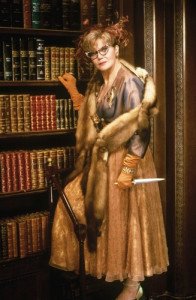 Eileen Brennan as Ms. Peacock in the movie, Clue
Do you like to play?
I love games,  and luckily I know some like-minded people. On the weekend I hosted a Clue Master Tournament. Twelve adults (dressed to kill) broke into two groups of six and played a game of Clue (made by Hasbro Gaming).
The game, designed by Anthony E. Pratt in England in 1949 has been popular for decades. (Wikipedia) I’m sure you’ve played it, but in case you forgot the details, it goes like this: A man (Mr. Black)  has been murdered. You have to figure out: who done it, where they done it, and which weapon they used. They left out motive, but that’s okay. To find the murderer you must use deductive reasoning.
At what we called the competitive table sat Mr. Plum complete with a pipe, Ms. Peacock with a lovely hat and veil, Inspector Clueso dressed in a suit jacket and speaking perfect French, and other great nefarious detectives. At the non-competitive table Ms. Plum, the Rope, Jessica Fletcher who decided to go blond for the weekend, myself as Bones with a skeleton around my neck and other detectives matched our wits. Great fun.
[youtube=http://www.youtube.com/watch?v=NHEpuz_gUGM&w=560&h=315]

Here is the trailer from the 1985 movie Clue

I dream about someday creating my own board game for one of my series.

What about you? What is your favorite board game? If you were to create one, what would it be like?

0 Replies to “My Clue Master Tournament”