I am proud to host my daughter J.C. McKenzie as my guest blogger today. Enjoy.

Mother Nature is a Bitch! 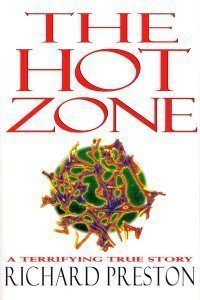 In  The Hot Zone, author Richard Preston makes an argument that hits me hard. He postulates viruses are a part of Mother Nature’s immune system and human society is really the parasite. After all, it is only when humans try to delve into unchartered territories or cultivate pristine wilderness, that we are exposed to extremely deadly viruses, such as Ebola Zaire, Ebola Sudan, Marburg Virus and Lassa Virus, to name a few. There are other arguments for why that is, but I like Preston’s:


Viruses are Earth’s natural defense against the human infection.

As a biologist, I LOVE that argument. I sit around and think about it all the time, just geeking out by myself. I even made my husband read the book, so I could talk to someone else about it. Unfortunately, he liked the military side of the book more than the biological one.
As a writer, it got me thinking.

What a great premise for a new world! I write Urban Fantasy (with strong romantic elements), and in the world where my Carus Series takes place, all supernatural beings have been exposed after a period of time referred to as The Purge.

“During The Purge, a series of natural disasters and deadly viruses swept the world. As the fragile human population declined, the death defying presence of the supernatural led to one preternatural group after another becoming exposed—Werewolves, Vampires, Fae, Demons, Skinwalkers, Witches, Angels, everything from our dreams to our nightmares. Pandora’s Box had opened.”

Essentially, Mother Nature got so pissed off with humans, she tried to kill a bunch of them off using what powers she could – natural disasters and deadly viruses.

Shift Happens, the first book in the Carus Series takes place roughly eighty years after the Purge, and it was a lot of fun to write.
Is there a book that you really enjoyed that had an interesting premise or unique world? What was it?
J.C. McKenzie
Shift Happens: A Carus Novel will be published by The Wild Rose Press. Release Date, TBA
***
Webstie: www.jcmckenzie.ca
Blog:  www.jcmckenzie.blogspot.com
Twitter: @JC_McKenzie
Image and Gif Credits, in order of appearance:
The Hot Zone by Richard Preston
http://images.wikia.com/adventuretimewithfinnandjake/images/b/b3/Kevin-Butler-Mind-Blown.gif
https://jo-anncarson.com/wp-content/uploads/Thinking.gif
http://i1287.photobucket.com/albums/a630/Danny19956/tumblr_m8sbnm2iZz1rthbk4_zps19dcc2f8.