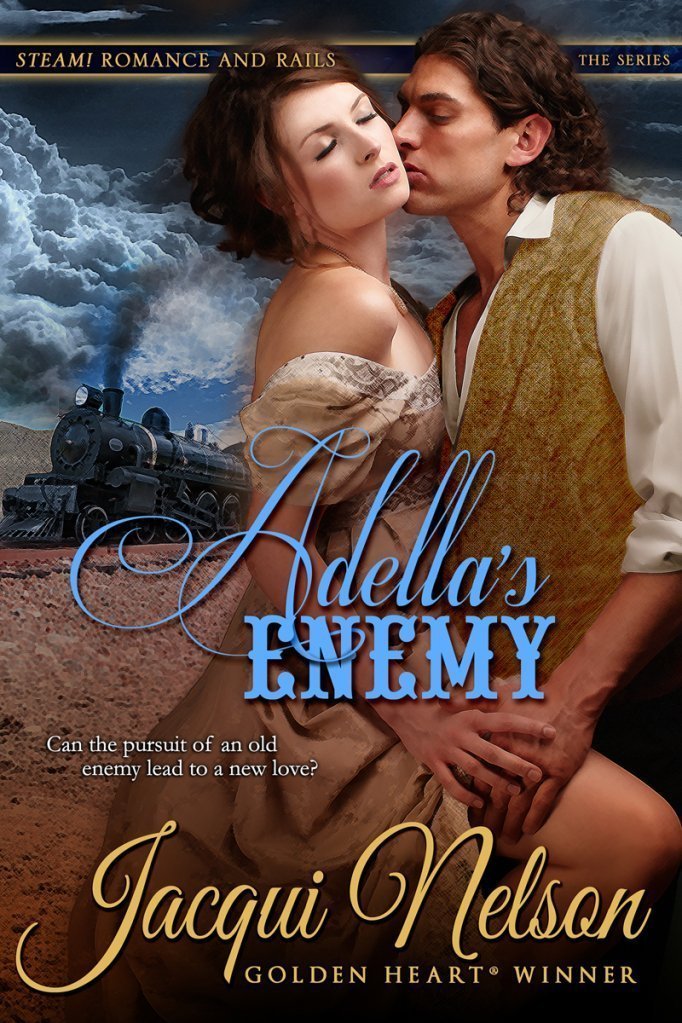 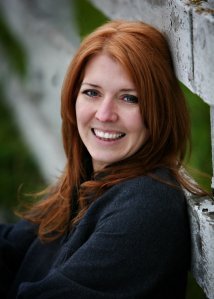 Thank you, Jo-Ann, for asking me to be your guest today. I love reading your blog, so it’s truly an honor to be here on one of your Friday guest blogger days!
I am an author of historical romantic adventure who loves exploring—whether it’s a walk down the street, a plane ride to the other side of the world or opening the pages of a new book. My inquisitiveness may have come from staying in the same place for my first eighteen years. I grew up on a cattle ranch in northern Canada—an hour and a half drive north of Edmonton, Alberta to be exact. My playgrounds were barns, fields and forests.
When I left the farm, I decided to explore. I lived in Edmonton, Calgary, Vancouver, Germany and England. I attended university and studied paleontology and other topics. I worked as a computer programmer, an animator and a fundraising assistant. My life in the country became a distant—but much loved—memory.
One thing did not change. A love of books has been a constant. When I decided to write my own stories about the Old West, it was like coming home. But I’m fascinated by all time periods and have recently begun a Victorian romantic suspense series which resolves around three uniquely skilled heroines who open a private inquiry agency in London. Every day I spend on this project allows me to reminisce about the four wonderful years I spent living in England.
But my debut release is also dear to my heart. In 2010, I was lucky enough to not only be nominated for, but to win the Romance Writers of America® Golden Heart® Award for unpublished authors.
But the best part about being a Golden Heart finalist is the friendships it can build. Two of the other nominees in my category were also Western romance writers and last autumn they asked me to join them in writing an anthology where three interlinked stories revolved around a true-life railroad race! Passion’s Prize featuring the novellas Adella’s Enemy by myself, Eden’s Sin by Jennifer Jakes and Kate’s Outlaw by E.E. Burke is the result.
Queen of the Universe Question
If I was Queen of the Universe, what would I change? I would make sure people not only found the love of their life but found loads of friends as well. Not everyone is fortunate enough to have parents, siblings, a soul mate or children, but friendships are just as precious and can be found everywhere. They even keep popping up in my writing. And what’s the perfect partner to a romantic story? A friendship story!
So I was over-the-moon happy when Jennifer Jakes and E.E. Burke, two friends who lived thousands of miles away, asked me to join them in writing an anthology about three women whose lives hinge on the outcome of a railroad race in 1870 Kansas.
Last week, I was blessed again when I attended the Romance Writers of America’s annual conference as a nominee for not one but two Golden Heart Awards. My second manuscript, a Western historical romance set in Dodge City, was nominated in the Historical category and my third manuscript, the first book in my Victorian London-set series, was nominated in the Romantic Suspense category.
But best of all, I finally got to hang out with my anthology writing partners and many other writing friends who I hadn’t seen in some cases for three years.
So here’s not only to romance, but to friendships!
And here’s the back cover blurb and an excerpt from Adella’s Enemy.
Can the pursuit of an old enemy lead to a new love?
In a race for riches, anything can happen. Five years after the Civil War, a Kansas railroad race heats up as former Rebel spy Adella Willows receives her mission from a Washington senator—play havoc with the Katy Railroad and derail its bid to win the race. The senator craves wealth. Adella craves revenge against the man responsible for her brother’s death. But her plans crumble into chaos when she matches wits with the railroad’s foreman, a handsome Irishman torn between two desires: winning the race or winning Adella’s heart.
* * *
“Look lively,” a deep Irish brogue boomed. 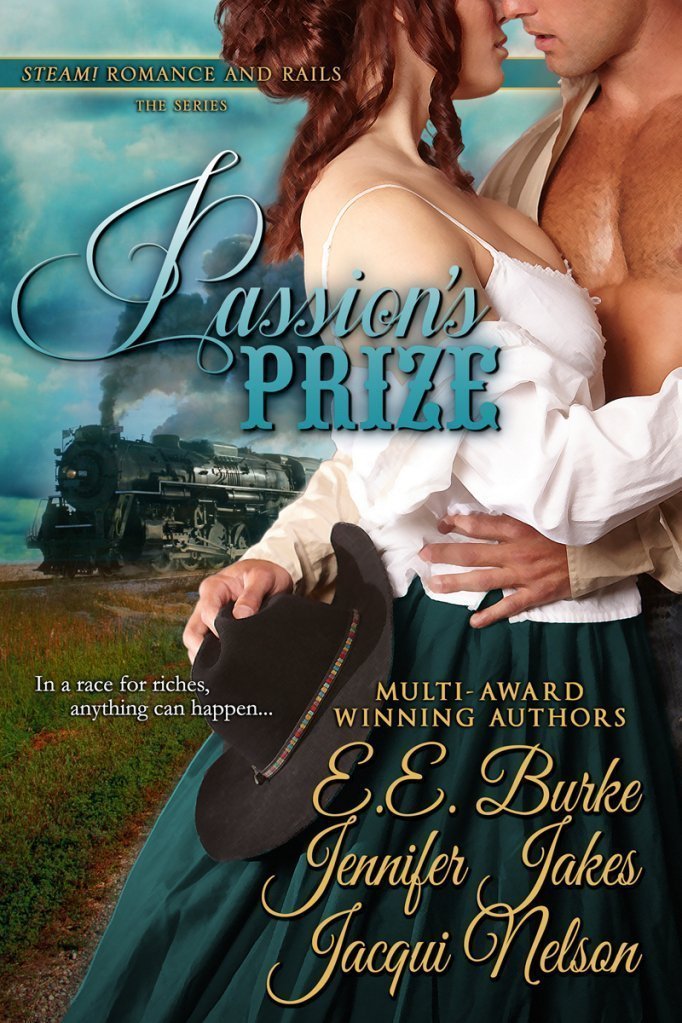 Clutching her valise in both hands, Adella flattened her spine against the train station’s wall. Its uneven surface jabbed her in a dozen uncomfortable places. She didn’t move.
Footsteps pounded up the stairs, making the boards shudder beneath her feet. Then a lone man bounded up the last step and across the platform, his attention fixed on the train. From his shaggy hair to his massive back to his powerfully built limbs he was a series of shades of brown. She squinted. He was covered in mud.
“Hop to, lads,” he hollered. “We’re late!”
A dozen men raced up the steps, swarming the platform like ants summoned from the earth to capture a hill. Brown ants. They shared their leader’s coloring. Like him, they were caked in mud so thick it covered them like a second skin, like armor on toy soldiers cast from the same mold…except they were the varying size and shape of ordinary men. All save their leader. Nothing ordinary about that one. With the height and muscular breadth of a giant, he towered over everyone.
A deafening squeal came from the front of the train. Everyone spun to face the sound.
The platform was only long enough to provide access to the two passenger cars. Between those cars and the engine stood a stockcar piled high with the iron rails used to form the track. A man, wearing loose fitting railroad bibs and a wide-brimmed hat drawn low over his face, crouched on top of the rails. The workmen surged to the edge of the platform, blocking her view.
“It’s one of the Joy Men.” The declaration came from the big Irishman hidden somewhere beyond the wall of bodies between her and the train.
A spy for the rival railroad? If James Joy had sent a rabble rouser from his line, she’d best learn as much about him as possible. Starting with what he looked like.
She pushed through the workmen. Each man spun with a scowl, ready to berate whoever poked him in the ribs or stepped on his toes. When they saw her, they stumbled back, jaws dropping. She reached the platform’s edge just in time to see the man on the stockcar leap to the engine, run across its back and slid down the cowcatcher to the ground.
“After him, lads!” The big Irishman roared from somewhere close.
She turned but didn’t see him. The men she did see stood frozen, their gazes locked on her.
Their leader shoved through them with a growl. “Why aren’t you—?” He slammed to a halt in front of her. He hadn’t touched her, but the sight of him looming over her with a combination of anger and disbelief twisting his mud-streaked face, pushed her back. She teetered on the edge of the platform, the weight of her valise throwing her further off balance. Many hands reached for her, including the giant’s.
She refused to let go of her valise and accept them.
She fell with a shriek. Her rear end hit the mud with a bruising wallop. She gritted her teeth to stop any additional embarrassing outbursts then, valise still in hand, staggered to her feet. And promptly sank ankle deep in the muck.
Galloping hoof beats splashed the sodden earth behind her. She could only assume the man had found a horse and was making his retreat. Instinctively, she tried to give chase. The mud held her feet prisoner. Blast it to Hell. All she could do was stare over her shoulder and watch the man ride pell-mell out of town, his floppy-brimmed hat waving goodbye.
A colossal groan rent the air. She jerked round to face the train, as did the men on the platform above her. The terrible sound came again, making the stockcar shudder with its force. A crack like gunfire echoed. Chains burst. Iron screeched against iron. And the mountain of rails toppled toward her.
Trapped as she was in the muck below, she’d soon be crushed in a muddy grave.