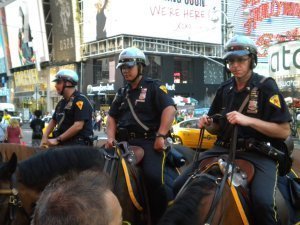 Policemen at Times Square
I’ve journeyed up the Empire State building, around the Statue of Liberty and down into the bowels of the smelly New York City subway. I’ve been dazzled by the lights of Time Square, blown away by drama of The Phantom and seduced by the buzz of the streets. I’ve listened to classical jazz in Bryant park, ate New Orleans shrimp in Bubba Gumps and looked at a rare Gutenberg bible in the famous NYC public library.But what I will remember most about NYC is it’s people. 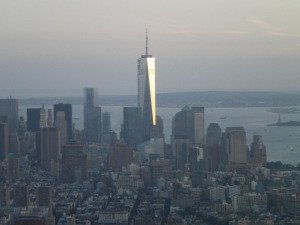 from the Empire State Building
PJ and I like to “stay awhile” when we visit. After we’ve seen the must-see sites the stars fade in my eyes, and I begin to really get the feel of the place. It’s like an awareness of the living culture sifts into my consciousness.
Without fail it is the people I’ve met that stands out the most. There were the two women from New Jersey who traveled with us on the subway to the Met sharing a slice of their lives, the young Auzzie ladies brimming with life down the hall who always smile, shy humble Gabriel who found the wrong Canadians, the woman we call “The Oracle” who dispatches information at a kiosk in Grand Central Station at lightening speed, everyone at Thrillerfest, our faceless apartment manager  and of course, our hero, The Supe.
New Yorkers rock. I am very grateful to have had the opportunity to come here and hope to return.

Paraphrased from Michael Connelly’s talk about writing series characters: Don’t hold anything back. Put everything into the book you’re writing. Then when you’re finished think of the next one.

all pics are PJs