This is a continuation of our sliced watermelon story… 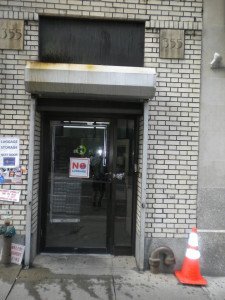 After thirty hard minutes of walking down steamy New York streets in 97 degree temperatures, we arrived at the key drop place on 36th Street, the place PJ went to get our apartment keys a few days ago. I had to see it.
We traveled through the garment industry area of town, no Starbucks in sight,  lots of dark entrance-ways that looked and smelled like dark holes to hell and of course construction overhead everywhere. That creepy feeling of not being where I should be crawled up my spine, and to top it off, the drips from air conditioners for the apartments above hit my head like rain showers.
We came to the first door. Yup, the signage definitely said 355 and we were on west 36th. This was the locked door he came to when he tried to retrieve our keys. After he sent me a text that the door was locked he scouted about and found another doorway two doors down with 355 on it. Okay, wait a minute. Manhattan is famous for Wall Street geniuses. Can they not number their streets? Lets just say their creativity matches Florence (on this street at any rate).
PJ gave me one of his wickedly mischievous smiles. “Wait,” he said, “There’s more.” 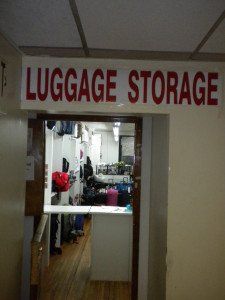 The Drop
He opened the second doorway. Down at the end of a long narrow corridor I saw the sign, Luggage Storage.
“That’s it,” he said. The woman ducked when he took the picture. This is where the keys were kept in a box of keys with our name on it. Notice there’s no sign of a travel agency here. I sighed, and wiped my wet brow. Could this story get any stranger?

Back to the original story…

I had held fort at our 9C studio apartment door with our luggage conversing with Gabriel and our Auzzie neighbors. PJ arrived, my hero, drenched in sweat and ready to open the palace gate. But, the keys wouldn’t work.
They didn’t totally not work. I could hear clicking and swooshing when I took my turn at them, but we couldn’t seem to get the sequence to open the damn door. For me, this was the final straw. I’d kept a positive attitude up to this point, but really -a locked door.
The faceless apartment manager routine had worn way too thin. Now he answered my frantic emails with, “OK”. Seriously, what does that mean. It’s ok that I’m locked out? It’s ok that I’m paying $1600 for a week in an apartment I can’t get into. It’s ok that I’m homeless in NYC?
As I grumbled and fumed, PJ kept trying the locks. Ten minutes later, he put his shoulder into the third lock and the door moved. Phew. At last we were in.
The studio apartment is smaller than the first one, but the wifi rocks. It’s clean and efficiently organized with awesome air conditioning and better water pressure than the Grand Hyatt. I’ll post pics another day.
We’ve spun many stories around this adventure. My favorite is that we’re actually squatting and the manager is collecting a nice fee via PayPal for a unit he doesn’t own. Travel is always exciting.

“The action begins in the first paragraph.” John Sandford

0 Replies to “Our NYC Key Drop”