Today – The Metropolitan Museum of Art 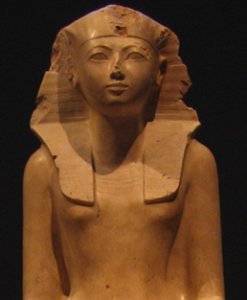 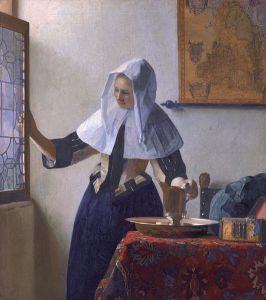 Jan Vermeer, Young Woman with a Water Jug
Have you ever had a day of  Oh-My-Goodness-Moments? That’s what it was like for me inside the Met, an enormous building on the edge of Central Park filled with exquisite art, a treasure trove of culture and heritage.
Our goal was to look at the Egyptian and European rooms.
Look – OMG more like glance. There was so much to see.
My favorite in the Egyptian rooms was the female pharaoh Hatshepsut, “…the fifth pharaoh of the Eighteenth dynasty of Ancient Egypt… generally regarded by Egyptologists as one of the most successful pharaohs, reigning longer than any other woman of an indigenous Egyptian dynasty.” (Wikipedia)
In the European rooms we spent time with the Vermeers and Rembrandts. The eyes on Rembrandt in his self-portrait dive right into you.
Then there were the Rodin sculptures… It’s an amazing place to visit. We spent about four hours there and hardly even nibbled at its edges.
The Move to Our Apartment
As I mentioned yesterday, while we expected  the three, or so, block move from the Grand Hyatt hotel to our studio apartment to be easy, it turned out to be a nightmare comedy. It all started with an exchange of emails between yours truly and the manager. I wanted an early check-in and he said, basically ask later. When later arrived I asked again, and he said, suuuuure, you can check in at noon. So in my mind I imagined meeting him at noon at the address.
We were there at noon with all our luggage. Temp mid nineties and climbing. A nice looking young man approached us and asked if we’re from Canada. When we say yes, he introduced himself as Gabriel and proceeded to take us up to the apartment. We learn that he’s an Economics major at the university and it’s one of his profs that owns the apartment. I’m loving this young man and would marry off my third daughter to him if I had one.
The apartment is lovely. He’s left watermelon slices bread and butter for us. He takes us on a a tour of the recycling and laundry facilities and answers all our questions and then he leaves. We settle in. I battle with the outrageously poor wifi connection to get my messages. A loud annoying sound rings through the apartment. On the third ring we discover an intercom behind a bookcase, but it’s too late. No 0ne answers us when we speak into it. I go back to my email.
The door bell rings jolting us once again. Gabriel told us to not answer the formidable door with three locks on it  for anyone but the police, but PJ opens it wide to find a pale and agitated Gabriel. We aren’t the right Canadians.
Wait…it gets worse.
The “Canadians” (who were actually Auzzies flying from Toronto) that he was supposed to meet phoned him wondering where he was and he realized his mistake. He apologized profusely, but we had to leave. We gathered our things and moved into the hallway. According to our information sheet (which is neatly filed in my folder) we are supposed to be in the apartment down the hall.
I email my contact. Nothing. Gabriel ph0nes my contact and we get the, “Read your information sheet. You have to go pick up the keys at….”  Didn’t the emailing back and forth cancel that out? Apparently not.
Definitely not the sliced watermelon treatment. We have to make a small journey to get our golden key.
Gabriel explains it’s two subway trips and a shuttle away. PJ and I look cross-eyed at each other. Could this get any worse? Yes, and it does.
Being a fast walker who always knows where north is, PJ sets out on foot to retrieve the keys. I hold fort, sitting on the dirty tile floor a couple yards from the smelly garbage chute with our luggage outside the “right” apartment, wondering about the kind of people the locks are designed to keep out.
The young Australian women come by with Gabriele and everyone takes the time to pity me. The women said I was welcome to stay with them, and Gabriel offered me a sandwich, but I took my guard duty seriously and stayed put. As if doing so would make any difference in the big picture.
Where the hell was PJ?  He should be there by now, but I haven’t heard anything. How will I ever explain to the family that I lost him?
Fifteen minutes later, I get a text from PJ: “At address nothing’s here.” I send him my contact’s phone number and  pull out our travel guides to start looking for places to stay, muttering a million not-so-nice names for he beast who promised me a NYC apartment.
Ten minutes later, I get a second text from PJ:”Got the keys.” I exhale. I don’t think I’d done that for awhile. You never miss your husband as much as when you’ve lost him.
No the story isn’t over yet.
PJ returns and we hug and feel like finally this mini-nightmare is over. Then we try to open the door. Yup, it won’t open.
More tomorrow.

“Be the best version of you, not a second rate version of someone else.” David Morrell (Rambo’s Daddy)

0 Replies to “Sliced Watermelon Treatment…and the Heat Goes On”