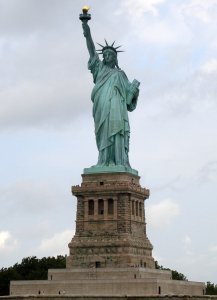 But not this hot. Triple digits – like 103 degrees. It’s stifling out there.
The heat wave has slowed our sightseeing plans to a crawl, but I’m still having a fantastic time. New York City has everything.
This morning we ventured out early, took the famous subway filled with crowds of people moving in every direction and pungent city smells,  and visited the Statue of Liberty. We got back around noon drenched in sweat and exhausted from moving in the oppressive heat. I felt like Dicken’s character Marley dragging his chains. Climbing the last two flights of stairs up from the bowels of the subway to street level which normally would be no big deal, almost killed me.
Tonight we stayed in our sweet little studio apartment (45th and Lexington- midtown Manhattan) and feasted on Martguerita pizza and a mixed salad from the Amish market down the road. Living like the locals. Luckily we have air.
I`ve been off-line for a few days, so here is a quick summary.Thrillerfest 2013 rocked. The craft sessions by Steve Berry, John Sandford, Michael Connelly, T. Jefferson Parker, David Morrell…(the list of famous authors goes on) were even better than I imagined and my head is swimming with writing ideas. I met lots of interesting fellow writers and talked about writing for days. Oh the joy of it. Agentfest was mind boggling, something I will never forget (nor will my feet – another story). Moving from the Hyatt to our apartment was supposed to be an easy two block walk but it turned into a nightmare comedy event. But I think that`s it for tonight.

“Start your story as close to the end as possible.” Steve Berry.

0 Replies to “Held Prisoner by Triple Digits in NYC”