Hiding Information with the 'Pope in the Pool' - Jo-Ann Carson 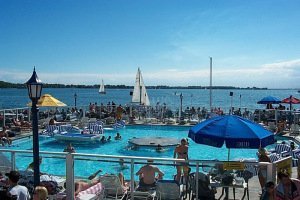 Deep in revision mode, I realize that my main problem with pacing is due to poorly constructed info-dumps. Wanting the reader to understand my characters I give them too much information in the beginning. I’m learning that:

“…the Pope in the Pool gives us something to look at that takes the sting out of telling us what we need to know.  And does so in a lively and entertaining way.” (Blake Snyder, Save the Cat, p. 125)

It sounds too simple. Let’s break it down:
The problem is:

“How to bury the exposition…[the] details of the plot that must be told to the audience in order for them to understand what happens next. But who wants to waste time on this? It’s boring. It’s a scene killer. It’s the worst part of any complicated plot.” (Snyder,p. 123)

The solution is:
Hide it. Create action on the stage that entertains the reader while you feed them the information they need to know. Kind of like a spoonful of honey to help the medicine go down. Snyder coined his funny title, Pope in the Pool, from a Mike Cheda script called The Plot to Kill the Pope. To give the reader information the writer developed a scene where the Pope swims laps while his representatives share the information. A pope in his bathing suit! The reader’s mind is so intrigued he doesn’t realize he’s being fed facts.
It takes practice:
It sounds easy, and looks easy in a well constructed plot, but it’s not. For example, in one of my stories I tried to distract the reader with a nine month pregnant woman who hated boats, stuck in a boat on a canal in Amsterdam terrified that it would tip at any moment. I thought it was funny. And then I fed her the information. My reviews on that scene have not been good. I’ve rewritten it several times and people still think it stinks. It seems I’ve made my reader hate my heroine for subjecting her pregnant sister-in law to such an event. Which is to say we can laugh at popes but not pregnant women. Back to the laptop. lol
How about you? Do you find it easy to hide information?

0 Replies to “Hiding Information with the 'Pope in the Pool'”