After the Poisoned Apple - Jo-Ann Carson 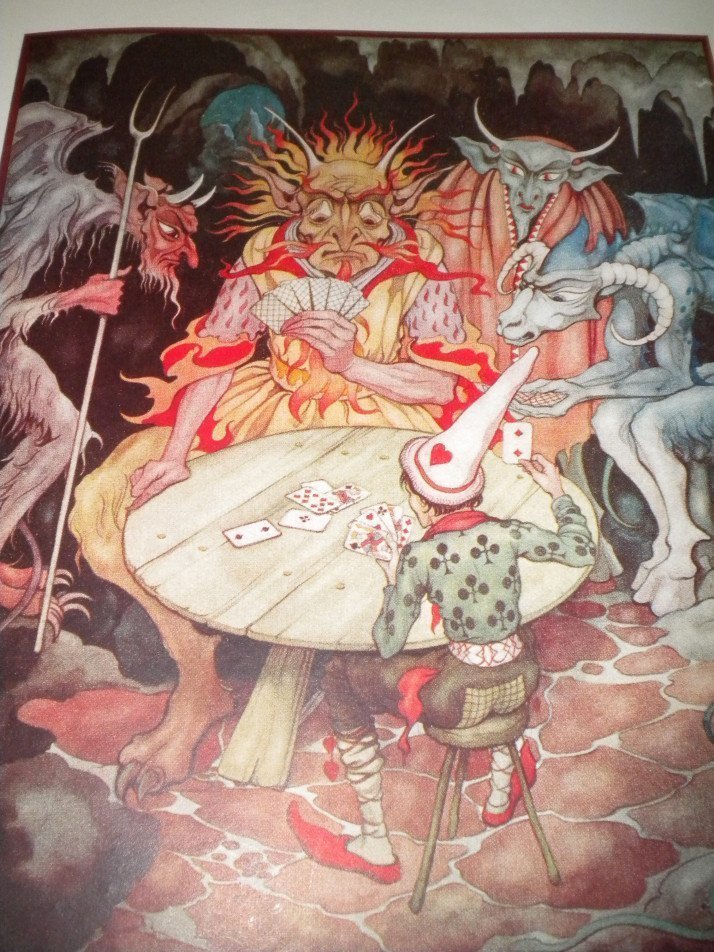 by Anton Pieck, 1941, found in a Dutch version of Grimm’s Fairtales ( De Sprookjes Van Grimm, Utrecht 1941)
The original caption read: “De oude Lucifer is met Speelhans aan het spelen.”
Do you like your stories neat, or a little messy? Comforting or terrifying?
Me?  I like mine raw and twisted.
What can you expect for someone who grew up with Grimm’s Fairy tales, a 200 years old collection of  disturbing tales that rattled and inspired the imagination of generations.   National Geographic explains:

“The stories collected by Jacob and Wilhelm Grimm in the early 1800s serve up life as generations of central Europeans knew it—capricious and often cruel. The two brothers, patriots determined to preserve Germanic folktales, were only accidental entertainers.” (National Geographic site)

Once upon a time, I wanted to do graduate work in folklore, but I decided eating was more important and got a teaching certificate instead. Decades later, I find the pull of the archetypal stories as intriguing as when I first heard them, and looking at Anton Pieck’s illustrations sends my imagination into a wilderness of vivid images.
Stories – Since the dawn of time they’ve brought us together. More than words, more than pictures, they hold an essence of truth blended with imagination that is spellbinding.
…my rambling thoughts on this April day. Do you have a favorite fairy tale? I’m torn between Hansel and Gretel,and  Little Red Riding Hood. The darkness of the woods and the evil that lurks within  puts me on edge and makes me want to write a thriller.

0 Replies to “After the Poisoned Apple”