Had too much to drink...and the men are fantastico - Jo-Ann Carson

I know my Romance reading friends out there are thinking, “Enough about the frescoes, salami and cappuccinos. Tell us about the men.” And I will… later.

This is a picture of David by Donatello, who’s work influenced many Renaissance artists.
Being in the Bargello (Museo Nationale) is like entering a medieval world, surrounded by frescoes and statues, beneath immense vaulted ceilings. All for 4 Euro! (pic from Wikipedia)
My stomach clenched as I overheard a weaselly looking man lecturing to twenty university aged students about the homo erotic features of the statue. They scribbled every word he said, readying themselves for some test in the future. There are obnoxious tour guides making comments everywhere we go. Why do we feel the need to analyze art to death? I recall Irving Layton’s comment about literary critics — vultures who study the semen left on bedsheets the morning after. Repugnant imbeciles.
Yes, I had too much to drink last night. For me, that’s two glasses of wine. Oddly enough, diet Pepsi and Tylenol are settling my stomach.
We chatted the evening away with friends. It was a warm and memorable event, the kind I’d hold dear to my heart wherever it happened, but made more enchanting by the setting of Italy. SV and I had 35 years of our lives to catch up on.  Her apartment, in the Santa Croce area, had frescoes on the walls and ceilings dating back centuries. It felt like an inner sanctuary of a chapel. Truly magnificent. There was a stillness within the chambers that held you close whispering its past into your consciousness just beyond your mind’s grasp. Best of all, it had a terrace overlooking a large green space. We sat and shared stories over wine as the sun set. Later we strolled through the streets with our husbands, down to a local prosciutto bar and ended the night with gelato. 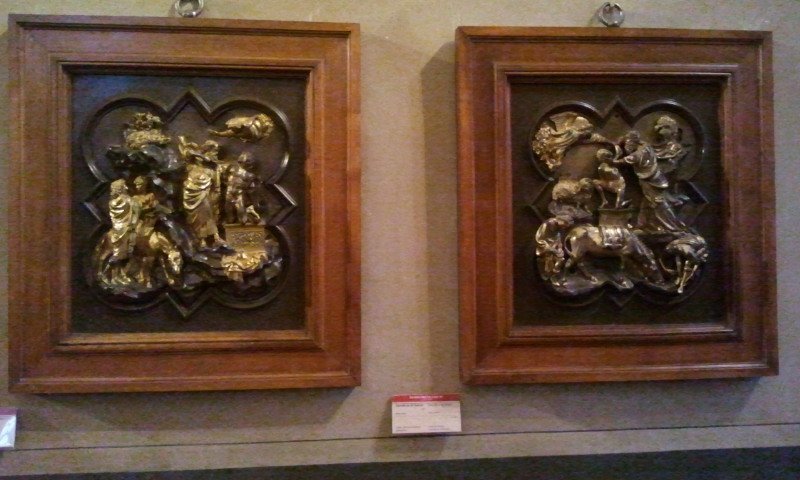 These two pictures are considered to be the starting point Renaissance art. They were created for a competition, and inspired the world! (Isaa’s Sacrifice by Lorenzo Ghiberti and Filippo Brunelleschi, Bargello Museum). (pic by pj)
About the men. When they pass me on the street I make a point of inhaling deeply. The European colognes have a deep unsettling richness. They dress well, and walk with a comfortable self-assurance, exuding sexuality that is  refined and subtle, yet brutally  masculine. If you really want a dose of Italian male beauty you have to check out the policemen. They stand with a “Make my day,” kind of stance, slim and athletic in build; dressed in black, with holsters slung on their hips, berets on their heads and dark aviator sunglasses. Oh my. If I was thirty years younger, I’d confess to crime.