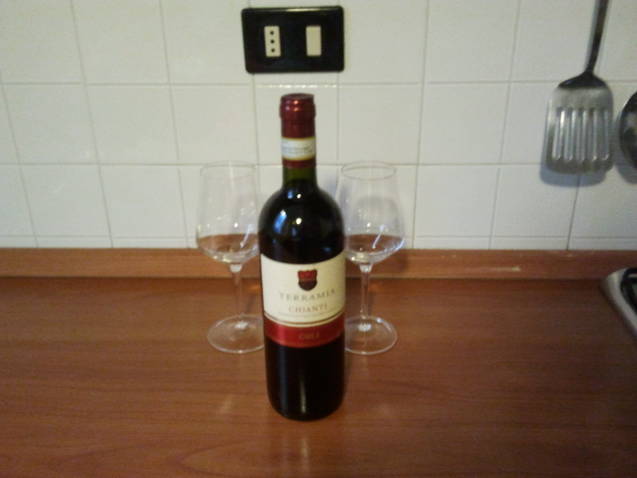 Location. Location. Location!
That’s what sold us on our Firenze (Florence) apartment. On Via Del Sol, right in the heart of the Italian city known as the cradle of the Renaissance. For the modest price  of 1200 euro we have a full 70 square metres of beautifully tiled space, complete with bathroom, washing machine and of course espresso maker, for a month. It sounds perfect on the Internet. And it is–sort of.
What they didn’t mention were the 57 steps. Vertical steps.
That is to say, I climb six flights of 9 stone steps to reach my front door. P.J. lopes ahead of me like it’s easy, but he’s Dutch. I swear, they have a stair climbing gene. My knees give out at 50, frozen in solid pain, but with a short rest I make the rest. The location is truly magnificent and worth the climb. I think they say that about Everest. I signed up for wine tasting and art gazing, mountain climbing epiphanies are a bonus.
After a memorable taxi ride from the airport, we arrived with stiff muscles, grumbly dispositions and empty stomachs. It had been a 28 hour trip that grew crazier by the moment. We got to the point where every time we looked at each other we’d laugh.
The final event was our experience in Paris, at the Charles de Galle airport.  We used a kiosk to obtain our boarding pass, and learned that we couldn’t get the gate number until 20 minutes before take-off. An interesting process to say the least. But who are we to complain. So we sat with some two hundred other travelers, eyes glued to monitors waiting our turn to learn which gate we needed to be at.
Every few minutes a horde of people would get up and rush out, having learned where they were to go. There was a stewing excitement in the room, and I couldn’t help but think about the tension workshop I’d taken the weekend before with Edna Sheedy. We all held onto our question (boarding gate?) and waited with bated breath.
With two minutes left in our waiting time, my stomach began to clench and unclench. It was the last of our three flights. I could imagine being in Florence in a couple of hours.I could taste the Chianti! We just needed the ##### gate number. Then a flashing red message beside our flight number read: delayed. And we waited. Just like in a well paced plot. A long five minutes later, the gate number was revealed and we rushed with a pack of travelers from all over the world for our gate, as if it was an oasis in a desert.
Only to fin d a bus. Yes, a bus. What could we do? We boarded it with the masses and ended up standing like squished vertical sardines, because there was barely enough room for everyone. The rising tension in the crowd was visceral. We were at least moving. Now we just had to find the plane.
The bus drove for some time, until it found one on a distant tarmac, in the middle of nowhere. It stopped and we got off. Was this the beginning of the end? At least it was a plane. They took our carry-on luggage, but what could we do about that? I’d stopped worrying about feeling powerless. I’d submitted to the god of wonky travelers hours ago when I ate cardboard tasting pasta.
We got on and buckled in. The plane took off. In a series of shudders and loud clunking sounds the landing gear was pulled in and we proceeded to Italy. I had a window seat. The side of the cabin was so cold I folded up my jacket into a six inch cushion to insulate myself, but I still felt like a Popsicle in December.
The captain announced the final approach and another series of sounds and shudders rattled the small plane. I prayed it was the landing gear dropping. But who knew? Visions of firetrucks danced in my head.
We landed and headed outside for fresh air.
Then we encountered the taxi line-up. That was such a bizarre experience it deserves a post all on its own.
Then there was the crazy but wonderful Italian cab driver who delivered us to our apartment where we met Cesare (pronounced Chezeray). He welcomed us to Italy with such warmth and charm, the hours of frantic traveling faded away.
That was the first day of my trip.
The picture is the bottle of wine Cesare left us. After our travels it tasted like a tiny piece of heaven.