What is Appropriate? - Jo-Ann Carson 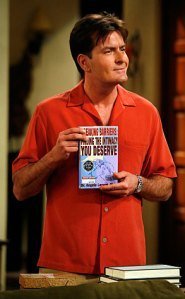 How far can we go?

My reflections on  life this week:
Valentine’s Luncheon with the Ladies: Our local RWA chapter held their annual Valentine’s luncheon last weekend and it was a blast. It’s a warm, supportive group of writers who share everything (even their rejections).
Reality Bites: Ugggh. I pulled out a manuscript I was letting rest. The tone is so inconsistent it makes the plot non-nonsensical. It slides from humour one moment to gritty tension the next like Janet Evanovich meets Hitchcock. My heroine bobs like a cork on a sea of emotions. Oh well, I’m learning and that’s my main goal. Bad writing doesn’t improve with age like wine,  it improves with work.  I’m pushing up my sleeves and settling in, dreaming of a day when I can read this manuscript and say, “Yeah, yeah, that’s the story I wanted.”
What is Appropriate? I read a line in a newspaper this weekend (I think it was the Vancouver Sun) that talked about the people behind Two and a Half Men liking the fact that what is deemed “appropriate” on TV has become a moving target. That got me wondering, first, what is appropriate and second, does “it” or should “it” move?
Is there no longer a line in the sand, a line no writer would want to cross, in fear of offending her audience?
For me there is. For example I stopped watching a popular TV drama (NCIS) when they showed a scene of a woman licking heroine from the open intestines of her dead brother, because she was a junky. For me, that was going too far. I blocked an individual on Google+ author’s circle last week, because she chose to put up a photo of a woman in bondage. Sorry, too far.
But…does my having a “line in the sand” mean that there exists, or needs to exist, a cultural line. After all, people like breaking taboos, and what is considered a taboo in society changes. Hmmm. Does being  PC (politically correct) mean that we have to adhere to a belief in “moral relativity”? That would mean that a subject is appropriate as long as someone in the world believes it is. Hmm
I tossed that around for awhile, and decided that I believe that there are some things which society needs to keep on the other side of the line, specifically the things which can hurt others, like child pornography … Whether someone farts in a story doesn’t matter to me, but if someone does something to hurt a part of society, that is another matter.
And…I have to say it. I hate it when writers fall back on breaking the latest taboo breakable subject to get attention. Remember when the taboo subject was gays? child sexual abuse? transmission of AIDS?  How cliche now. A good story should rely on something more than that.
UH..and I’m still learning what.
What do you think?